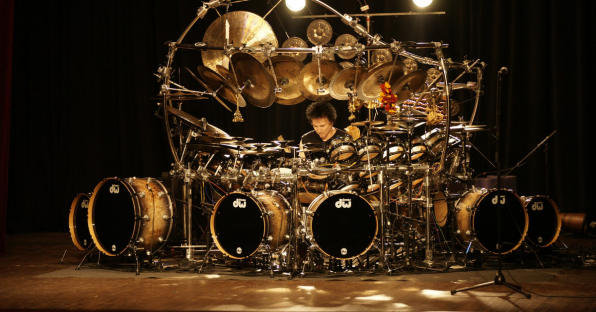 Coming up the concert of American drummer Terry Bozzio in Riga, on November 2 at Music House Daile at 7pm, here are 10 reasons why you should attend it.
• For the first time in Latvia there is a unique opportunity to attend drummer virtuoso Terry Bozzio’s solo musical performance and see him at the world largest tuned drum set.
• Terry has been a band member of a legendary American composer, guitarist and producer Frank Zappa.
• Ranked as one of the world’s best drummers of  “Rolling Stones: 100 Greatest Drummers of All Time” in 2013.
• Worked together with the world-famous rock band Korn on their 8th studio album.
• His unique way of operating a drum kit like an orchestra.
• Founder and member of a popular American band Missing Persons, playing in new wave music style.
• Ranked as one of the best drummer of all time at “Ten Craziest Drummers Ever” by Esquire Magazines.
• The concept of the world’s biggest drum set, Bozzio has been working on, is now fully developed and ready for it’s audience.
• Only Terry Bozzio can play a melody on percussions so it will sound like a piano.
• This exact concert is presented to be a real music show & theatrical performance, and we bet you have never seen anything like this before.

Concert series „Art Of Riga Jazz” were specifically made for musical connoisseurs, as the program brings up exclusive concerts and workshops by artists who visit Latvia for the first time. Last year concert attendants had an opportunity to enjoy and discover such genre masters as Bill Laurance, Kristin Asbjornsen and Lionel Loueke. Continuing traditions many interesting concerts are also expected this year.
Tickets are available on Biļešu Serviss and on the Internet.
Don't be square, be there!