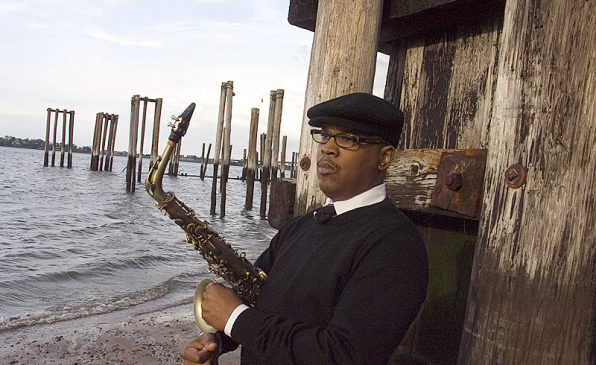 Rigas Ritmi Festival presents – 4th of November, at the Latvian Radio 1 Studio – the experimental Swiss trio VEIN together with American sax virtuoso Greg Osby!
Saxophonist, composer, producer and educator Greg Osby has made an indelible mark on contemporary jazz as a leader of his own ensembles and as a guest artist with other acclaimed jazz groups for the past 20 years – he has been called one of the generation’s best sax players. He has earned numerous awards and critical acclaim for his recorded works and passionate live performances.
The artist skillfully maneuvers between lyrical, rhythmic and harmonious compositions, therefore creating unusual and memorable sound. He has received the Jazz Journalist Association Best Alto Saxophone Award for four years in a row - between 2000 and 2004. He has released 15 records with the prestigious “Blue Note Records” and in 2007, he founded his own recording company, called “Inner Circle Music”.
In addition to his performance schedule, Osby devotes a generous amount of his time to educational activities. He has been an adjunct music faculty member in the jazz program at The Peabody Conservatory in Baltimore, a faculty member of the University of the Arts in Philadelphia and the Berklee College of Music and has hosted clinics and lectures at some of the most prestigious music conservatories in the world, like in 2008, when Osby brought his group to Harvard University where they were in residency for a week of clinics (also known as workshops) and performances.
VEIN is a Swiss trio, characterized by deep musical interplay between the piano, double-bass and drums. Pianist Michael Arbenz, drummer Florian Arbenz and bassist Thomas Lähns come up with their own idea of musical interplay and are deeply connected by the extensive wish to experiment musically. They write their own compositions and arrangements, as well as have already released three albums.
Since VEIN was founded, the trio has regularly joined forces with guest musicians in horizon-expanding and ground breaking projects, including saxophone player Dave Liebman and trombone player Glenn Ferris. Greg Osby masterfully moves through the groove-heavy, lyrical, rhythmically and harmonically complex and open pieces and passages of the trio’s repertoire – artists have collaborated for many years and have established a musical friendship.
“Greg Osby is a New York saxophonist, whose provocative attempts to mix jazz with hip-hop have turned ears.” – allmusic.com
“A trio with a thrilling creativity!” – Rolling Stone
Tickets available at “Bilesu Serviss” box offices and on line at www.bilesuserviss.lv
Don’t miss a great concert!