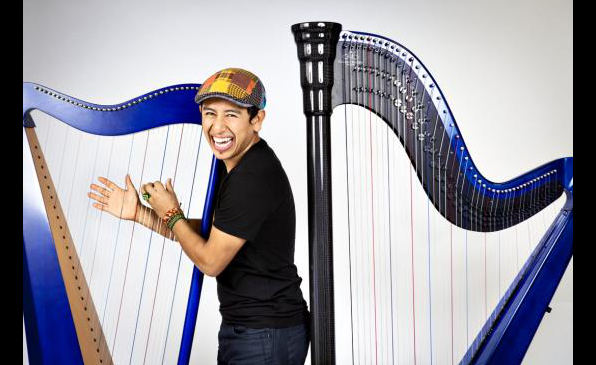 Edmar Castaneda is a New York bound Columbian, who became well known around the world because of his original and virtuoso harp technique. His music features colorful African, Brazilian, tango and flamenco rhythms, yet Castaneda himself says: “My music does not fit any specific musical styles, as it crosses many boarders.”
Castaneda has created a new musical style, called jor​opo that merges waltz and 18th century Iberian music with African traditional music themes thus creating a fascinating medley of styles. His craftsmanship is characteristic of his specific harp-playing style, when he simultaneously plays the melody and bass – it is no wonder that listeners are surprised by the sound that is created by the agility of his fingers, thus creating the illusion that the musical composition is performed by an orchestra. “I play the bass with my left hand and the melody and harmony – with my right hand. If the audience close their eyes and listen, the feeling is created that two or event three instruments are played at the same time,” says Castaneda.
The abundance of symphonic sound, swift chord changes together with versatile talent and captivating charisma are the things that make Castaneda so unique and he conquers the ears and hearts of audiences around the globe. His music crosses boundaries, changing the idea of what sounds are created by the harp. Castaneda is convinced that everything is possible.
"Edmar is… an enormous talent, he has the versatility and the enchanting charisma of a musician who has taken his harp out of the shadow to become one of the most original musicians from the Big Apple" - Paquito D’Rivera
Feel the rhythm!