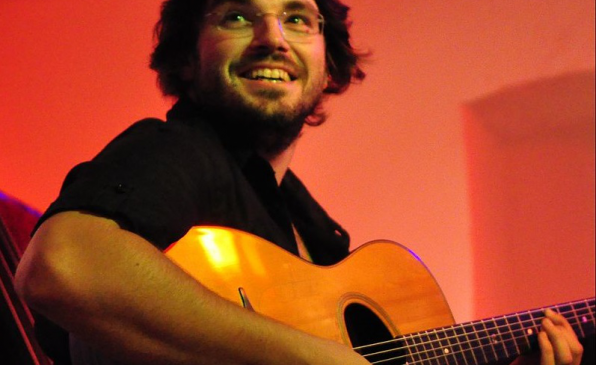 For the first time in Riga virtuoso guitar player Joscho Stephan will perform at Latvian Radio Studio 1 on March 2nd.

Gypsy jazz star Joscho began to play the guitar at the age of 6, being influenced by his father a member of a local cover band. For the first time Joscho has heard the recordings of legendary jazz guitarist Django Reinhardt at the age of 13. That made a huge impact and defined the main musical direction for the young musician. He has not merely absorbed this music, but also interprets it on the highest level and is actively engaged in extending its boundaries.

By relentlessly experimenting with different right hand approaches Joscho developed power and clarity, as well as speed and fluidity in his sound. Barry Wahrhaftig once said that Joscho has astounding technique, along with a wonderful sense of melody, and a lot of soul.

“I found everything in the way that Django’s playing – rock, jazz, classical music, flamenco – everything I love. The melody in it, the rhythm, the idea, etc. It incredibly so great!” - Joscho Stephan

Joscho’s debut album “Swinging Strings” was named CD of the month by American magazine Guitar Player. Quoting highly regarded Acoustic Guitar Magazine – he is the guarantor for the future of Gypsy jazz guitar.

Despite his young age, he has been performing together with the finest Gypsy Swing musicians in the world, such as Paquito de Rivera, James Carter, Charlie Mariano and Grady Tate, who enthusiastically praised the talented newcomer after the cooperation.

“Joscho Stephan is a true rising star of Gypsy Jazz and one of the most ferocious players on the scene.” - Robin Nolan

He had toured in Australia with top guitarists – Martin Taylor and Tommy Emmanuel, and has performed with his own bands (trio to quintet) on numerous important European festivals (Slovenia, Italy, France, Poland and the UK). His concert appearances in New York’s Lincoln Center and the Capital of American country Nashville were equally well-received, as were his performance in the New Yorker jazz shrine Birdland.

Don’t be square be there!