Home > The Festival > News > Emotional tenderness within an elegant performance

Emotional tenderness within an elegant performance 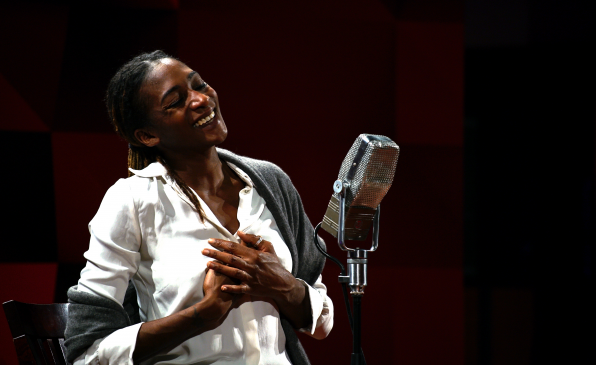 The "Art of Riga Jazz" concert series continued on November 23, with its charming and elegant British soul and jazz vocalist ALA.NI, who moved the audience to tears with her fantastic voice and sincerity.

This evening, the overwhelming Latvian Radio 1 studio was characterized by a special mood, which the artist created with the virtuoso guitarist Thomas Naim. In the concert, ALA.NI sang her own compositions about love, covers of the favorite songs and improvisations, where the authors of the lyrics were the audience themselves.

During the concert, the musician invited the audience to create bird sounds in the wood, which formed the background for her performance. With her sensual, delicate and vibrant voice, ALA.NI earned unceasing applause at the end of several compositions.

After the concert, we listened to the audience's opinion, who as one appreciated the excellent acoustic of the studio and the striking impression of the artist's voice.

"That feeling was so crystal clear, and the question is whether it's her voice, microphone or place. So clean and amazing sound. I have never heard anything like that. - Elina, a concert attendee

Musicologist Inese Lūsiņa: "This is a very great concert of lyrical mood. The sound really flew in this studio and we could experience, what the colors can get a person's voice. And, of course, the singer's freedom is admirable. "

The performer's reflection on the concert: "I have never sung in a room like that before. When you get to perform in places that are engineered for sound, its different thing then in a bar or even the way the modern buildings are built now. The detail isn’t there. It was even more intimate, cause I could come out of my mike and sing into the room. And usually, it only happens in a church. "