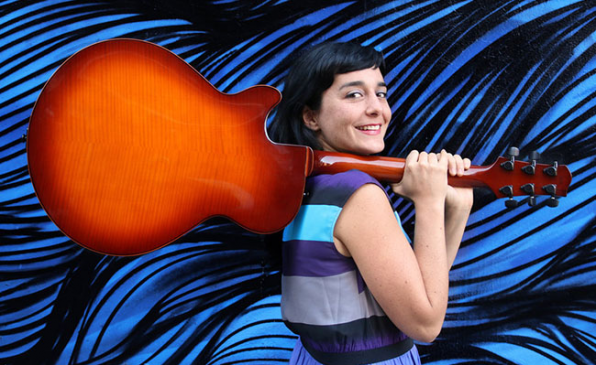 Camila Meza is considered to be one of the best-kept secrets in New York City, but now she is poised to step into a broader spotlight. Soon the Chilean-born musician will issue her new album “Traces” – album that features her beautiful, eccentric compositions while showcasing her amazing vision and dexterity on voice and guitar.

She belongs to a new generation of jazz musicians that are interested in creating new sounds and allowing diverse influences into their music. With love for this exploration, Camila felt right at home in the diverse and creative jazz scene of New York City.

Camila Meza has created a big impact in the New York jazz scene. She possesses an innate and rare combination of qualities as a singer and guitar player, who also writes her own songs and arrangements. She has a highly expressive voice with a unique timbre and way of phrasing, while her improvisations and accompaniment on the guitar are equally touching and soulful. Camila's music takes us on a joyfully energetic and deep journey full of beauty and adventure. Her Latin American roots and profound connection to jazz combined with the fusions of contemporary and popular music give the music she creates a very special and appealing sound.

With an already flourishing career in Chile from the age of 19, by the time she moved to New York at 23, she had already recorded two albums under her name, which received great accolade from jazz media in Chile. Camila quickly started gaining attention in the Jazz scene and started performing on a regular basis at the best jazz clubs and venues in New York such as Jazz Standard, Village Vanguard, Blue Note, Smalls Jazz Club, The Jazz Gallery and Rockwood Music Hall. An artist with an international reputation, she has already played in festivals and venues all over the world.

Ms. Meza brings an appealing combination of lightness and depth to all the material, singing in a bright, clear voice against the agile stir of a first-­rate band. Her improvising, on electric or acoustic guitar, is serious business. – The New York Times