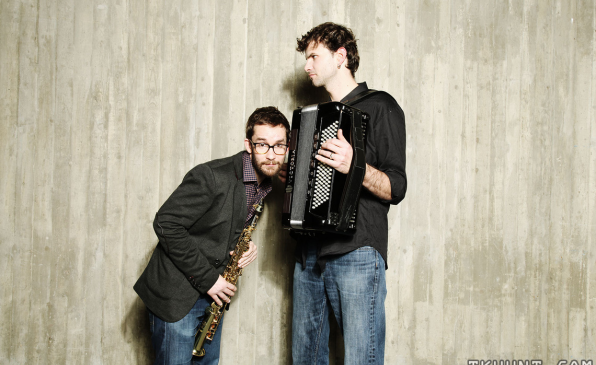 When both of the prestigious French jazz awards Prix Django Reinhardt in 2012 and Victoires du Jazz were already won, and a chance of performing together with jazz legends like pianist Jackie Terrason, drummer Daniel Humair, clarinettist Michel Portal and many others – was already stand, Emilie, known as a jazz master in homeland of France, cause a sensation with his album "Belle époque" in the European jazz world. "Belle époque" or “The Beautiful Epoch” is a duo work together with the accordionist Vincent Peirani, who received the Prix Django Reinhardt in 2013, as well as the last years’ German ECHO Jazz award as the best international artist. The same award ceremony of ECHO Jazz has recognized the duo as the best international group.

Vincent Peirani has graduated from the Conservatory of Nice, as he is an arranger and a composer, plays accordion and clarinet. He tends to participate in a wide range of music genres’ projects with the amplitude from classic to trash metal. His latest album “Living Being”, which has been released last year, is also collaboration with Emile Parisien.

“Emilie Parisien is one of the most fascinating and innovative soprano-saxophonist of the rising generation of France, as his international career is currently booming,” says Latvian Music Academy jazz music department associate professor and a saxophonist - Indriķis Veitners. „Initially started with light play in the best French classical jazz manner of Sidney Bechet, it has grown serious, innovative and exciting playmaking with the accordionist Vincent Peirani. They mix jazz, tango, free jazz, French folk and world music. I personally think that Emilie Parisien performance is going to be one of the greatest experiences of this summer, and I am looking forward with an impatience to see it.”

Parisien has graduated from the Conservatory of Toulouse, and has released six albums, four of which are quartet, one quintet and one – a duo with Vincent Peirani.


Jazz diva Dianne Reeves is going to perform on June 30 at Riga Congress Hall on a second part of the double bill.

International music festival Rigas Ritmi 2016 will be held from June 29 till July 3 in different venues in Riga. Music connoisseurs will be delighted by the concerts at Riga Congress Hall and the Daugava concert venue. There are also going to be free concerts at the Egle oper-air leisure park, Origo Summer Stage and the jazz club Trompete. Traditionally, Latvian Radio 1.studio will be the venue of festival artists’ master classes.

Tickets are available at all of the “Biļešu Paradīze“ ticket offices and on the Internet.