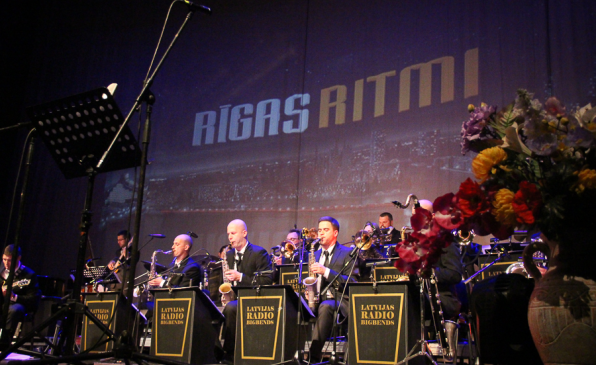 The 14th International “Rigas Ritmi Festival” this year took place from 2nd till 5th of July. Altogether, 72 musicians from 19 countries – USA, UK, Latvia, Australia, Israel, Columbia, Finland, Italy, The Netherlands, Sweden, Austria, Israel, Poland, etc. – performed in the festival. More than 20 concerts took place and seven of them were free; the concerts were attended by an audience of over 8000.
Music lovers had the chance to see performances of world-renowned artists and musicians, like six “Grammy” Award winner, trumpeter Randy Brecker, who performed together with the Latvian Radio Big Band, multiple Grammy Award nominees Jeff Lorber Fusion, ladino diva Yasmin Levy, guitar virtuoso Mike Dawes, harp player Edmar Castaneda and bandoneonist Daniele di Bonaventura, as well as young local and foreign talent.
The festival’s performances took place at different places and venues around Riga – the Riga Congress Hall, Origo Summer Stage, the Latvian Radio 1 Studio, open-air leisure park “Egle”, as well as new concert venues – Daugavas Concert Hall and the jazz  club “Hamlets”.
The festival’s newest concert venue, Daugava Concert Hall over the ancient Triangula Bastion – part of the historic Riga fortress – in the heart of Old Town Riga, on the embankment of the Daugava River, for three days hosted the Olainfarm Jazz Nights concert series. In the hot July nights, performances were given by such artists as Albare, Smooth Band feat. Diāna Pīrāgs, Dobrek Bistro and Rachel Claudio.
During the festival, alongside concerts, other activities took place also - master-classes and showcase programs. In 2014, six master-classes were held, all together measuring up to 12 hours; the master-classes, which were attended by over 100 people, were hosted by such music professionals as Mike Dawes, Albare, Jeff Lorber, Edmar Castaneda and Rachel Claudio.
The festival organized the showcase programme for the sixth annual year, which is aimed at promoting the best jazz, improvisation and world music artists and musicians in Latvia to producers, journalists and festival organizers from around the world. The most recent showcase was attended by representatives of the Katowice Jazz Art Festival (Poland), German Institute of Jazz, music journalists and industry representatives from Estonia and academicians from Australia.
“Just played at the great organized Rigas Ritmi Festival with the amazing Latvian Radio Big Band!
These guys (and gal) can hold their own with any big band on the planet!
Great section work and sound, killer soloists and swingin’ rhythm section...– Randy Brecker
„Great festival, it was certainly the smoothest trip I've done..." - Mike Dawes
“We are delighted about the show. Yasmin felt extremely good about her performance. It was one of her best shows ever and we hope that the audience enjoyed it together with us. Hopefully Yasmin will be able to return to Riga again in the future!" - Yasmin Levy
We want to thank the audiences, supporters, sponsors, volunteers and everyone, who helped and assisted the festival – we hope to see you in the next concert series this Fall!
Facts about Rigas Ritmi Festival:
- Established in 2001
- One of Baltic’s biggest jazz & world music events
- 8000 listeners
- Next events: Winter Concert Series 14.10.-12.12.2014
Feel the Rhythm!