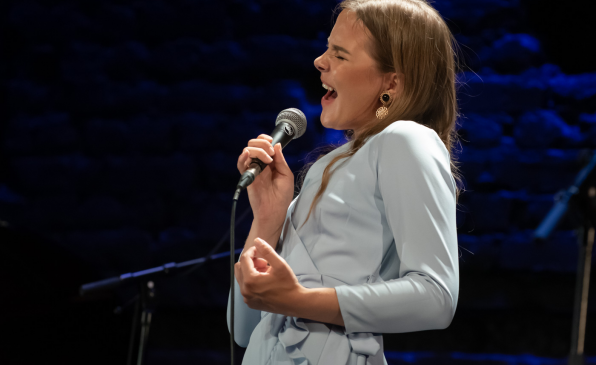 The 19th improvisation, jazz and world music festival "Riga Ritmi 2019" has ended with an exotic Chinese artists' concert at the Congress Centre.
From July 2 to 6, musically versatile concerts took place at Riga Congress Centre, outdoor park "Egle", jazz club "Trompete", club "Kalku varti", "VEF Jazz Club", as well as "Origo Summer Stage", where the festival opening took place. While Latvian Radio 1 studio hosted well-participated master classes.
The festival reached a particularly high emotional wave at the concerts of American musicians Jon Cleary and Jamison Ross, which may be explained by the fact that this year "Rigas Ritmi" celebrated a century of jazz in Europe. American jazz bands introduced the audiences overseas to this well-known genre precisely in 1919.
The very well recognized performances were the ones by French flamenco lady Paloma Pradal, the Swedish pop-jazz star Jonah Nilsson and the exotic Chinese artists A Bu and "Tianchang Band" also.
"I think listeners felt our intention to show the wide range of jazz in this year's festival program not only geographically but also musically," summarized the festival's artistic director Maris Briezkalns. "Especially how this genre has evolved and found its identity in other countries. This year, we focused on Chinese jazz. Definitely valuable fact was Latvian musicians playing together with Jon Cleary, as well as the performances of new talents Jamison Ross and A Bu. We are glad for re-publishing Latvian jazz album "Kur tu teci", which perfectly embodies the Latvian jazz gene. Now we are geting ready for our anniversary festival."
Foreign artists especially highlighted the festival's perfect logistics - transport, hotels, meals, rehearsal spaces, and times, allowing you to concentrate fully on the main - the best possible musical performance. Riga's beauty and responsive audience were mentioned also.
"I like festivals that include not only the main concert hall but also several smaller places in the city," said Federico Milone, an Italian saxophonist. "This is one of these, and very well organized. I have a rehearsal room and a clear day schedule that is important to me as an artist. And I really like Riga, this is a beautiful city!"
One of the cornerstones of the festival is the master classes, which are well understood by the jazz stars coming to Riga, because they know the importance of good teachers in this genre and understanding of what is improvisation at all. "Usually we play music and don't talk so much about it," said Jon Cleary. "However, such a meeting with students makes us think differently about what we are playing. I hope that master class participants will really go to New Orleans and be more knowledgeable about what's going on there. It seemed that the audience was interested and understood what we told and showed them."
"We love the interaction with the audience because it connects musicians and listeners to one soul party," said Jamison Ross. In turn, his guitarist Rick Lollar added: "Moreover, the desire to play a great soul party was further enhanced by the morning master class, where we met many really interested young musicians. It inspires."
"It seems to me important to talk about your mistakes as we learn from them," said Jonah Nilsson. "In the master class, I also told honestly that I was very nervous in the first half of the concert the night before. The parents who came to Riga were even surprised about me. But in the end everything was fine - I really liked both the audience and the concert venue. And I would like to come back soon..."
Next year, the festival "Rigas Ritmi 2020" will take place from July 1 to 5, when its 20th anniversary will be celebrated. The preparation of the specific program has already begun.
The partners of this year's festival were: Riga City Council, "Latvijas Gaze", Ministry of Culture, Freeport of Riga Authority, "Latvenergo", "Olainfarm", State Culture Capital Foundation, "Turtle Wax", supporters: "Tele2", official car "Forum Auto", festival restaurant "Kalku varti", hotel "Radisson Blu", shopping centre "Origo", US Embassy in Latvia, Chinese Culture Centre in Latvia and "Turkish Airlines". Informative supporters were Latvian Radio, "XO FM", "RigaTV 24", "TVNET", LSM, "The Baltic Times", "360 gradusov", "Otkritij gorod", "EcoMedia", "Kas? Kur? Kad? "," Riga in Your Pocket" and "Svetku Laiks".
The photos from this year's festival are in Multimedia section!