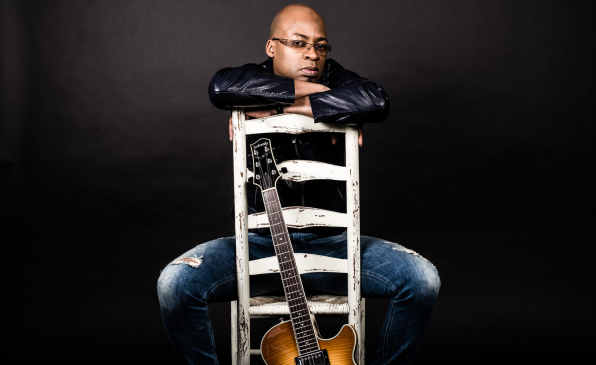 Lionel Louke is a guitar player praised by Herbie Hancock as a „musical painter”. He brings a presence to jazz unlike any other due in part to his West African upbringing heard in the uniqueness of his playing, vocals and phrasing. He has developed his personal artistic vision, melding African guitar tradition with jazz harmony, playing the instrument in a new percussive way, and using unusual techniques to alter the sound of it.

His long fingers flickered across the strings, eliciting not just a syncopated groove but also a shifting undergrowth of chords. He was just as busy vocally, clicking his tongue in percussive counterpoint, singing phrases in a floating cadence. It all felt rooted in African folk traditions but also cosmopolitan, progressive, harmonically fluid. – The New York Times

Loueke grew up in a poor west African family. At the age of 9 he started to percussion instruments, but after a while influenced by his brother gained an interest in guitar. At first he played African pop music, but discovered jazz when first heard George Benson’s album. It took Loueke a year to earn the he needed to buy his first guitar. However, he could not afford to replace the strings, which had to be special-ordered from Nigeria. Instead, he soaked his strings in vinegar to keep them clean. When the strings broke, he had to replace them with bicycle brake cables which were very hard on his fingers.

He has studied in Paris, afterwards in Berklee College of Music, he also auditioned in the prestigious Thelonious Monk Competition which allowed him to gain recognition among the well known jazz musicians. He has performed with such musicians as Herbie Hancock, Terence Blanchard, Charlie Haden, Gretchen Parlato, Richard Bona, Dianne Reeves, Sting, Wayne Shorter and many others.

He specifically wanted to learn how to play the guitar. He admits that if he wanted to use the knowledge he was acquiring in schools exclusively on African instruments, he would have less flexibility and Possibilities. Because of the fact that there is no such thing as chromatic kora.

I have two heritages. One is from my ancestors from Africa, and that goes through my music, my body, my soul, every aspect of what I do. But also I have the heritage from the Occident, from the West, from Europe and the U.S. I've been blessed by all different parts of the world, and most of the songs reflect that. – Lionel Loueke

On 2008 the Blue Note Records released his album „Karibu” bringing him recognition and approval from music critics, emphasizing his uniqueness – mixing the traditional African music with modern jazz harmony, unique vocal and complex time signatures. Album also features two of his mentors – Herbie Hancock and Wayne Shorter. „Karibu” was a good start to a fruitful cooperation with prestigious record label Blue Note and now they have released already his fourth album.

On stage besides Lionel Loueke will also appear Roberto Cecchetto (guitar) and Nasheet Waits (drums).He started the cooperation with Cechetto a while ago, but this year they decided to expand the band with the arrival of a great drummer – Nasheet Waits.

Their music is magnetic and unpredictable. Original compositions melted with spontaneous moods and feelings. Nasheet’s new entry in this project helps improve the source of opportunities. Music without borders. – The European Music Agency