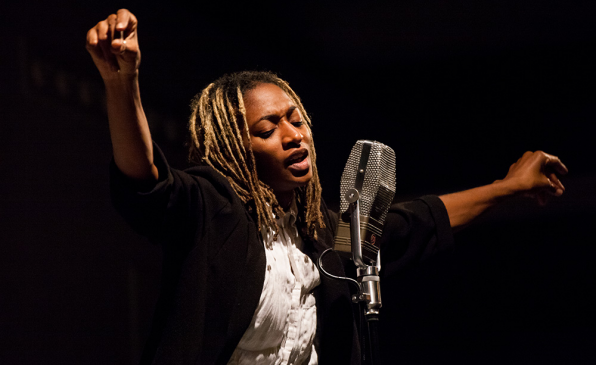 On November 23 at Latvian Radio Studio 1 at 7pm, within the frameworks of Art of Riga Jazz concert series, an enchanting, unique and elegant British soul & jazz singer ALA.NI will perform together with guitar virtuoso Thomas Naïm.

At the beginning of her career ALA.NI was a background singer for such famous artists like Andrea Bocelli, Mary J. Blige and Blur. As time passed she decided to start a solo career, and releasing her debut album “You & I” was the first step. Atmosphere of it’s several compositions was somewhat gloomy, telling us about the unsuccessful relationship she had before. Although, you can feel the touch of 20th century combined with the tenderness of modern shamelessness as you listen further to “You & I”.

Originally born in London in a family of a reggae-calypso bassist & couture seamstress, she now resides in Paris. As she first sang Over the Rainbow at the age of 3, her talent was immediately obvious to her parents. ALA.NI says, “If I could be anyone, let me be Julie Andrews!’’ As a child she was obsessed with The Sound of Music, John Holt and Vivaldi. As performing on stage was a bit of a challenge for a young singer, she then enrolled to London’s Sylvia Young Theatre School.

Some say she dresses up like Lorin Hill and Jane Birkin & sings as passionate as Judy Garland and Billie Holiday, but she floats over sparse and create completely unique music and lyrics being inspired from her own experience. ALA.NI performs wistful, lovelorn tunes that seem influenced by no music made since the middle of the 20th century with the charisma of any-century sound.

Dark Disneyland is the way artist describes the music she produces. Her voice feels so magical as like a dark romance from 40s has past into the modern world. When she sits behind her decagonal 1930s RCA ribbon microphone, she conjures a sense of intimacy with her facial expressions, hand movements and sustained vibratos.

‘’Listening to ALA.NI singing it’s like to feel uniquely out-of-time’’.

ALA.NI naturally incorporates theatrical elements into her music and performances. Inspired by classic Hollywood musicians, old folk songs, but giving them her own fabulous touch.

Her stage name is ALA.NI. „It means, that I could be someone else," says an artist, with her birth name Alani Charal.

Concert series „Art Of Riga Jazz” were specifically made for musical connoisseurs, as the program brings up exclusive concerts and workshops by artists who visit Latvia for the first time. Last year concert attendants had an opportunity to enjoy and discover such genre masters as Bill Laurance, Kristin Asbjornsen and Lionel Loueke. Continuing traditions many interesting concerts are also expected this year.

Tickets available on Biļešu Serviss and on the Internet.