Home > The Festival > News > For the first time in Latvia drum guru from USA - Terry Bozzio!

For the first time in Latvia drum guru from USA - Terry Bozzio! 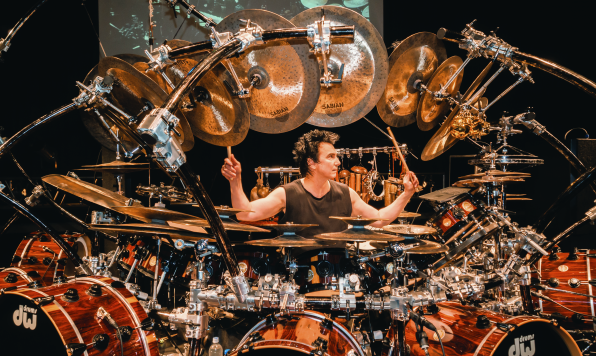 Drum legend Terry Bozzio, known for his work with Frank Zappa, Jeff Beck, UK and his critically acclaimed solo ventures. Terry Bozzio was born on December 27, 1950, in San Francisco, California. He started at age 6 playing makeshift drum sets. At the age of 13 he saw the Beatles' premier performance on The Ed Sullivan Show and begged his father for drum lessons. Bozzio has cited Mitch Mitchell and Ginger Baker as his main influences in the youth years. During the 1960s, he played in the garage bands Blue Grass Radio, The Yarde, and Tamalpais Jungle Mountain Boys.
In 1968 Bozzio attended Sir Francis Drake High School in San Anselmo, California, where he received a music scholarship award, and later went on to the College of Marin. During this time he studied concurrently with Chuck Brown on the drum set and Lloyd Davis and Roland Kohloff on a percussion and timpani scholarship. He also played Bartok-Dahl-Cowell & Baroque chamber ensembles with the Marin and Napa County Symphonies.
Continuing working with a wide range of musicians across several genres, since the mid-80s Terry Bozzio has been working on the concept of creating his own drum set, which is nowadays is fully developed and contains 26 toms, 2 snares, 8 bass drums, 53 cymbals, 22 pedals and other.
In 2001, he teamed up with Chad Wackerman to produce the Duets video and Alternative Duets CDs. Bozzio won the Clinician of the Year award twice as well as Drum Magazine's Drummer of the Year and Best Clinician. Internationally, he received Slagwerkkrant Magazine's (Netherlands) and Player Magazine's (Japan) Best Drummer Award. Bozzio was inducted into Guitar Center's RockWalk in Hollywood on January 17, 2007 along with rock and roll icons Ronnie James Dio and Slash.
Bozzio also worked with the nu metal band Korn on their 8th studio album after the departure of their drummer David Silveria. He was scheduled to play on the road with the band during the Family Values Tour, but he left and was replaced by Joey Jordison of Slipknot and later Ray Luzier. Since November 2008 Bozzio has toured with guitarist Allan Holdsworth, bassist Tony Levin, and drummer Pat Mastelotto as the experimental super-group HoBoLeMa. In 2013 he was ranked #5 in Rolling Stones: 100 Greatest Drummers of All Time, and ranked #9 in Esquire Magazines “Ten Craziest Drummers Ever”.
"Bozzio is a master, and his way of operating a drum kit in the context of an orchestra is something quite new and rich."
- John Ferngrove
"Art Of Riga Jazz" music gourmet series, offering unique concerts and master classes in the program, with artists who have not yet been to Latvia. Last year, visitors were given the opportunity to meet Bill Laurance, Kristin Asbjornsen, and Lionel Loueke. Continuing the tradition, this year, no fewer musical surprises are expected.
Tickets available on Biļešu Serviss.