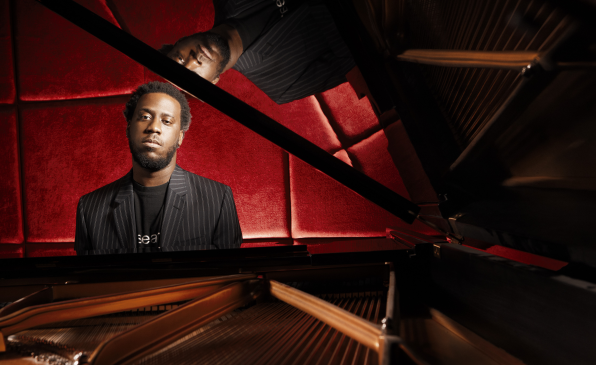 On 4th of July pianist and composer ROBERT GLASPER will perform in Riga!
The talent of American jazz pianist and producer Robert Glasper manifests in an ability to mix different genres of music – hip hop, R&B, electronic and also jazz music. This combination forms an experimental fusion. But not in vain – Glasper calls this project Robert Glasper Experiment! Robert Glasper won this year’s „Grammy” award for the best R&B album „Black Radio”, recorded at prestigious „Blue Note” jazz record label. Soul musicians Erykah Badu and Lalah Hathaway as well as hip-hop artists Lupe Fiasco and Musiq Soulchild took part in the making of this album.
As a pianist, Glasper endows a melodic sense that can mesmerize you and a technique that can even scare you, but thankfully he also possesses the innate sense to know exactly which is needed at a given moment
Robert Glasper was raised in Houston, Texas, and his mother was the first and strongest musical influence for him. Mother not only played piano and sang gospel music in the church, she also led a band that worked the city's jazz and blues club circuit as well. The first piano playing experience for Glasper was by the age of twelve. He admits that gospel music gave him sensitivity and knowing how to reach people and knowing how to be in tune with your feelings and the emotion of the music. It all helps for him to relate to the audience.
By the time he reached adolescence, Robert knew that his destiny was to be a jazz musician. He enrolled to the Houston's famed High School for the Performing Arts. After that Glasper enrolled at New School University in Manhattan. Soon after that he met his future band member Reid and vocalist Bilal. As an undergrad, Glasper gigged with Christian McBride, Russell Malone and Kenny Garrett. Glasper has also been a keyboardist for some of the era’s defining hip hop and R&B stars – touring with Mos Def, Kanye West, Erykah Badu and even Jay-Z.
Robert Glasper has entered the world of music as a innovative pianist and talented composer. Within the festival „Rigas Ritmi 2013” everyone is welcome to attend the great concert of the most actual artist on the R&B, hip hop and jazz scene. A workshop by Glasper is also being organized.
On 4th of July in the double-concert Robert Glasper will perform together with a new African jazz artist Somi.
Glasper refuses to be pigeon holed into a single genre and in the process, takes the listener on a musical journey of epic proportion, - jazzreview.com