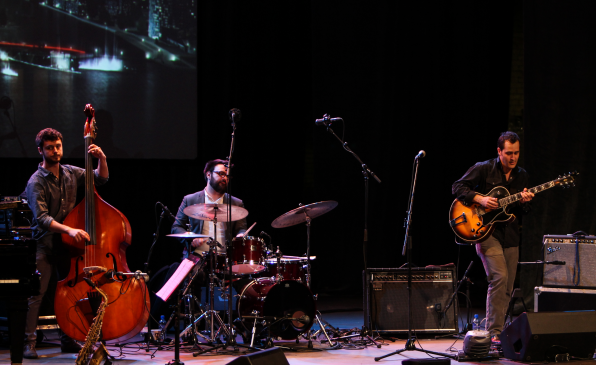 On 17th of October American jazz guitarist Jonathan Kreisberg visited Riga as part of his latest European tour, hosting an unforgettable workshop and a concert later that night together with his quartet. The concert took place at the new concert hall RIGA at the Latvian Academy of Sciences and was received to a standing ovation – it is needless to say that this jazz performer has gained some new fans in Latvia.
Jonathan begun his stay in Latvia with the vastly attended workshop at the legendary Latvian Radio Studio 1 – it was attended by fans, young and professional musicians, as well as journalists. The young and talented Latvian guitarist Rihards Goba said: “Not only Jonathan is an amazing guitarist, he also is an exciting person to talk to.” The discussions during the workshop stretched from guitar playing techniques to the artist’s favorite films.
Pictures from Jonathan Kreisberg’s workshop!
During the concert, Jonathan together with his quartet - Will Vinson (sax), Rick Rosato (bass) and Colin Stranahan (drums) – played music from the latest album, called “Wave upon wave”. The popular guitar player appreciated the warm welcome from the audience and their appreciation of his music.
Pictures from the Jonathan Kreisberg Quartet concert in Riga!
We were glad to see You in the audience during the concert and we also hope to see You in our next concert, on 28th of November at the Riga Congress Center, in the world-premiere of Latvian Radio Big Band’s and Australian multi-instrumentalist James Morrison’s project “Mare Balticum”!
Don’t miss a great performance!