Home > The Festival > News > Interview: Music is my connection to myself and to other worlds. I can't imagine life without it.

Interview: Music is my connection to myself and to other worlds. I can't imagine life without it. 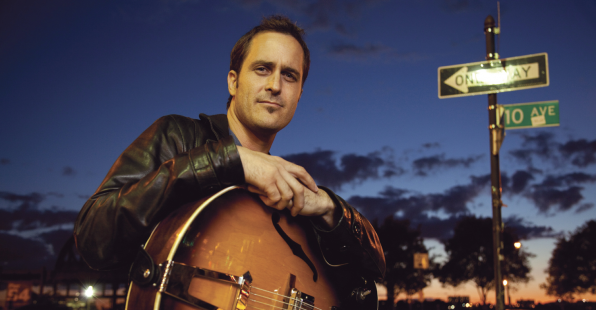 Recently the festival called guitar-virtuoso Jonathan Kreisberg to ask him some questions about his career as a musician, his travels and what the audience may expect from his concert in Riga.
What are you most looking forward to in Riga, Latvia?
It will be my first time in Latvia, so I'm looking forward to everything!  By now, I've travelled to many places with my music, so it's rare that I get to experience something for the first time.
How do you expect the Latvian audience to be like? You are touring so much – how do the audiences differ if they
do?
Some audiences are calm, and others can be crazy.  It doesn't always correlate with their enjoyment of the music. It will be interesting to find out more about the feeling of the audience there.  I will just say, we don't need the audience to feel like they are in a classical concert.  The music is serious, but people can jump and yell if they are feeling it.
You have said in an interview that it is hard for a jazz musician to talk about success because jazz is a constantly evolving journey, and there are always new goals after the previous ones have been achieved. What is your nearest goal at the moment?
Great question. I feel like the composition and recording of the new CD "Wave Upon Wave" was an achievement, and I’m looking forward to sharing it with people. The next nearest goals are probably some musical and technical things that I've been wanting to break through with on the guitar. Then after that, time to start composing again!
What do you enjoy most in your career as a successful jazz musician with so many international tours?
For me, the music is still the most enjoyable aspect. Travelling can be hard, with missing sleep and jumping on planes all the time. But then when the concert starts, you remember what you came for. Then you just close your eyes and try and bring the audience on a journey. That is why you endure the sacrifices of living on the road...to connect with people from different cultures and backgrounds through music.
In Riga you are not only going to give a concert but also a workshop for young musicians. What is the one main thing you think you should teach them? What is important for them to know at a young age?
There is so much to talk about. It will depend on their level and what they are working on, but I definitely like to draw their attention to the importance of mastering simple elements. If they build more interesting and complex concepts upon that foundation, then there are no limits to what is possible.
Can you describe the process of your last record “One”?
Well, "One" was a solo guitar cd, so I had to go pretty deep into the possibilities of the instrument. It was a a very intimate album, and had a lot of struggles and rewards for me. In the end, I was trying to do the same thing I do on most of my cds - to tell a story and take the listener on a journey.
And your new record "Wave Upon Wave"?
The next CD, "Wave Upon Wave", is released in November, but I will actually have available for the folks in Latvia in October as a special pre-release issue. It features the band that will play in Latvia. For that CD, I was attempting to compose music that was sophisticated, but hopefully still hits you right in the soul. I think I was trying to compose music that wasn't over intellectual. A lot of young musicians coming out of schools are getting so much information, but I still feel that Jazz is about the feeling more than the thinking. We can't forget that.
What is your favourite thing about your current concert programme that maybe would inspire other people to come and see the concert?
Great question! I think that we live in a time when the big record companies are trying to create a dumb and unselective audience. There isn't very good music education in most schools as I mentioned, and honestly the companies prefer it that way. It makes it easy for them to push untalented artists on the public. THAT is where we as creative jazz musicians become quite important. This is a music based on using strong musicianship and a mastery of the language to find new sounds and create different improvisations every night. So our audiences will find something that is unique and soulful, and that they will not find through the mass media.
What role in your life plays the guitar?
It's my connection to myself and to other worlds.  I can't imagine life without it.
Tickets available in all "Bilesu Serviss" ticket offices and online: www.bilesuserviss.lv
Don't miss a great concert!