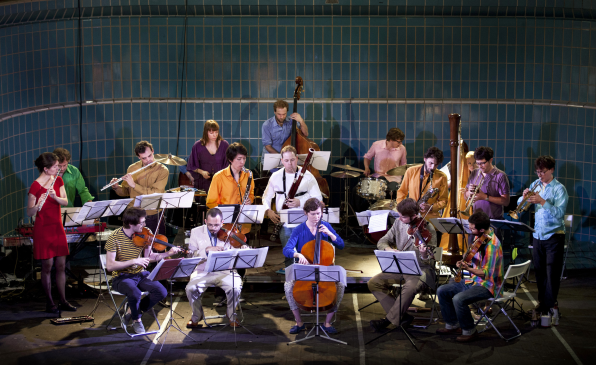 The musical partnership Andromeda Mega Express Orchestra (AMEO) was established by young musicians from more than eight different countries in 2006, in Berlin. They play a variety of musical instruments, ranging from the trumpet and the saxophone to the harp. Each and every one of them is a master of their own craft – one in classical music, the other – in jazz, therefore merging in a special and surprising synthesis of sound.

Daniel Glatzel, the founder, conductor and saxophone player of the band, says that the instruments, represented in the orchestra, are rarely found all together in one band. Thus, the combination creates the orchestra’s unusual sound, making it something non-traditional – a sort of big band, which is not a big band in the classical sense. Some may call it a unique and progressive orchestra with rock elements or a variation of chamber music. These musicians call themselves a musical cabaret, where anything can happen, whether it be serious, or comical. Yet the most suitable name of the band would be “not-a-bigband”, therefore stressing what it most definitely is not.

AMEO has recorded two albums. Experts expected critical acclaim for the band’s first album - Take Off!, but the album Bum Bum, recorded in 2012, centered on electronic music and its synthesis with acoustic instruments. Each musical instrument for Bum Bum was recorded separately, later merging them together, thus creating the sound.

AMEO in Germany has drawn attention by performing in odd venues, like contemporary arts centers with particular interior solutions and the band especially favors empty swimming pools as concert venues. The orchestra says that it enjoys non-standard surroundings, as they offer vast acoustics possibilities.

Prepare for a wild musical chaos – on 28 November, “Rigas Ritmi Festival” offers the chance to see the extraordinary orchestra perform in Riga!

Their music does not fit any standard, it varies between jazz and contemporary music with a significant input of the library of traditional quotes; full of surprises, crazy twists and refreshing irony. – nmz.

Music that is intellectual and brings extensive amounts of joy. It is variety on a technically high level. – BR KLASSIK.