Home > The Festival > News > …it's mostly all about Christian Scott's trumpet

…it's mostly all about Christian Scott's trumpet 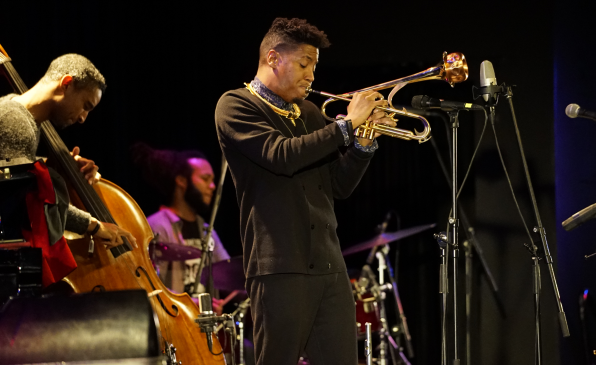 On the night of the 24th of November the music house “Daile” was packed, as American trumpeter Christian Scott gave an incredible performance – this was the second concert of Rigas Ritmi Festival 2015 Winter Concert series. The whiteness of the first snow covered the grown while the golden sound of Scott’s trumpet poured throughout the dark concert hall.
With the concert in Riga, Christian closed his three-month long tour presenting music from his latest album “Strech Music”, as well as some audience favourites and jazz standards, like Herbie Hancok’s “Eye of the tiger”. Scott was accompanied by very talented, young musicians - Braxton Cook - sax,  Lawrence Fields - piano, Kris Funn - bass, Corey Fonville - drums,  Dominic Minix – guitar and Elena Pinderhughes – flute, voice.
Stretch music, according to New Orleans jazz musician Christian Scott, is an approach that engenders a more absorbent and sensitive kind of jazz. "We are attempting to stretch—not replace—jazz's rhythmic, melodic and harmonic conventions to encompass as many musical forms/languages/cultures as we can," he says.
After thanking everyone for the warm welcome in Riga, Christian took everyone on a two-hour-long musical journey to New Orleans and back.
The audience were pleased about the opportunity to attend the concert of such a current musician in today’s jazz music world here, in Riga.
Don’t miss a great performance!