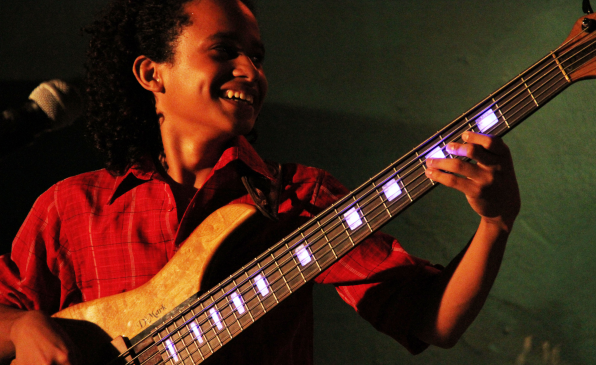 The young bass virtuoso Michael Pipoquinha started demonstrating his talent by publishing his videos on Youtube. During this time the prowess and precociousness he demonstrated in the videos was noted on bass forums as players two and three times his age tried to parse his musical magic. Musician learned to play bass organic way with the help of his father and grandfather, which makes everyone admire his musicality and the vast technical capacity even more. At first he played guitar and learned from the records of such guitar virtuosos as Pat Metheny and Joe Pass. The basis of guitar has helped the musician to introduce a bass technique combining harmony with bass line, that way creating his unique, brazilian sound.

Likewise Pipoquinha, Cainã Cavalcante also started his musical career at the early age – 7 years old. At the age of 9 he was already called the new prodigy of guitar. He learned how to play guitar from Roger Jales, who also encouraged the new artist to participate in various contests. For example, on year 2000, 10 year old musician won the IV International Guitar player’s contest “Musicalis” in Sao Paulo, but on 2001 he already recorded his first album called “Morador do Mato”.

Cainã & Pipoquinha share a trajectory that links at many points: the musical family background, the beginning of musical career in the childhood, the musical partnerships with legends of Brazilian music, the uneasiness by new and the lightness with hard, serious and sincere work. In nowadays, the two young musicians leave the condition of "wonder kids" to become respected Brazilian musicians. – Europe Jazz Network

Both musicians will meet the admirers of their talents twice – not only in a concert at Congress Centre, July 1st, but also the day before that – on June 30th at Latvian Radio Studio 1, where both workshops will be held - at 10 AM the workshop of Michael Pipoquinha, at 12 PM – workshop of Cainã Cavalcante.

This duo will move you - the groove and lightness of Brazilian music, the suave rhythms and colorful harmonium. The synergy of the classical guitar and bass guitar always holds an unexpected charm. – guitarist Kaspars Zemītis