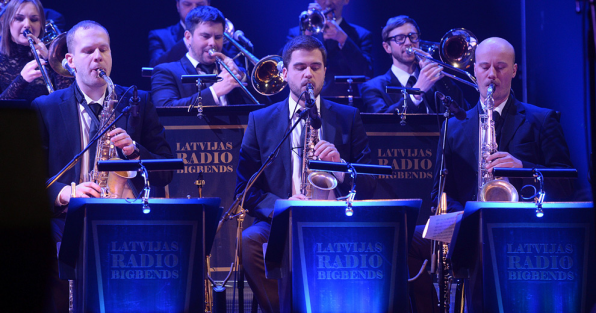 This Wednesday, on January 28th, Latvian Radio Big Band, soloists maestro Raimonds Pauls, Kristīne Prauliņa and Intars Busulis will perform at the Tchaikovsky Concert Hall in Moscow, as part of The Latvian Presidency's in the EU Council public diplomacy and cultural programme. The concert will be streamed on-line in real time.
The concert programme includes jazz standards and classics, as well as completely new arrangements of Latvian film themes and folk songs, which were featured in the brand new project “Mare Balticum”.
Vocalist Kristīne Prauliņa will perform songs from the concert programme “New Latvian Jazz Songs” that where composed especially for her by maestro Raimonds Pauls. Intars Busulis will sing together with Kristīne, as well as give solo performances, featuring compositions from Maris Briezkalns Quintet musical programme “Latvian Evergreens” – the works of Latvian classics in new jazz arrangements – as well from the music album “Dai Bog” – maestro’s compositions with lyrics by Russian poet Yevgeniy Yevtushenko.
Though the concert is sold out, it will be streamed in real-time on http://meloman.ru/concert/big-bend-latvijskogo-radio-i-rajmond-pauls/
The creative mind behind the project – member of the board of foundation “Mūsdienu Mūzikas centrs” (Contemporary Music center) – Māris Briežkalns is happy that Latvian musicians are able to attract such audiences abroad, mentioning the recent Rigas Ritmi Festival presentation in Brussels, as day after the official Latvian Presidency's in the EU Council opening; “Māris Briežkalns Quintet” and Laima Jansone Trio’s project “Zarbugans” double concert was also sold out and attracted much interest from foreign media.
The Latvian Radio Big Band has been renewed after a 16 year break. Composer and pianist, Maestro Raimonds Pauls, producer and jazz musician Maris Briezkalns and conductor and jazz performer, saxophone player Karlis Vanags are the new creative team behind the renewed Latvian Radio Big Band. Since 2012, the big band has performed together with world-class artists, including Italian vocalist Roberta Gambarini, American jazz performer Kurt Elling, drummer Jojo Mayer, “New York Voices”, 6 Grammy Award winner, American trumpeter Randy Brecker and Australian multi-instrumentalist James Morrison.
“Just played with the amazing Latvian Radio Big Band! These guys (and gal) can hold their own with any big band on the planet! Great section work and sound, killer soloists and swingin’ rhythm section! You can’t ask for more than that!” – Randy Brecker
In 1966, the Latvian Radio Big Band was founded under the name Latvian USR TV and Radio Variety Orchestra. In 1992, the band was renamed the Radio Easy and Jazz Music Orchestra. The first leader and conductor of the big band was composer Ringolds Ore and from 1968 to 1991 – violinist and arranger Alnis Zaķis. Music professionals, such as Maestro Raimonds Pauls and Gunars Rozenbergs have lead the Latvian Radio Big Band. The only professional jazz orchestra in Latvia was liquidated in 1996; after that, Rigas Ritmi Festival took over the jazz movement leadership.
This concert is part of the cultural programme of the Latvian Presidency of the Council of the EU. The main values of this programme are contemporaneity, uniqueness and excellence. The aim of the cultural programme is to present Latvia as a reliable partner in cooperation, a cultural tourism destination and a source of inspiration, top-class professionalism and cultural achievement. The programme will consists of almost 200 events.
About artists:
The most distinguished writer of Latvian popular and jazz music, pianist Maestro Raimonds Pauls is famous not only in Latvia, but also far beyond its borders. His music has been performed in countless countries and in the most prestigious concert halls, and all of this was possible thanks to his unique flair of melody. The fertile, creative imagination of the maestro has brought together the intonations of Latvian folk music, jazz, blues, rock’n’roll, French chanson, German schlager and the intonations and elements of national popular songs with the arising trends and always manages to create contemporary and generally attractive music that is at the same time thoroughly democratic.
It is characterized by modern rhythms and arrangements, but a fine feeling of harmony allows the composer to avoid the monotony that plagues many modern pieces of pop music. Unlike many other songwriters, Raimonds Pauls himself is often the interpreter of his own compositions or the concert master of performers. A hallmark of his sound is a very individual, short and accurately courted stroke that is a distinct characteristic of his style. But he is not afraid to entrust his melodies for the interpretation of other creative groups or to form special bands of performers and produce the sound of his music by himself.  In addition, the bright intuition of Raimonds Pauls continues to surprise with new and unexpected projects, and his creations have been an integral part of Latvian popular music for 50 years, some of them even enjoy the status of folklore and national importance.
Kristīne Prauliņa has performed in Latvia and elsewhere as a soloist, together with the Riga gospel choir and also with different jazz, blues and pop bands. Winner of the street sports and culture movement festival Ghetto Games 2013, the vocal competition. Kristīne won the Grand Prix of the International Jazz Artist Contest “Riga Jazz Stage 2014”. Her debut album “Melns un balts” (Black and White) was released in December of 2014.
Intars Busulis is a musician, vocalist and trombonist, as well as a radio personality. He is the winner of many artist competitions, including the International contest of young pop singers “New Wave 2005”, International Jazz Artist Contest “Sony Jazz Stage 2004” Grand Prix winner and the International Improviser Contest Grand Prix holder in Parnu in 2004. He has performed at many jazz festivals, like “Kaunas Jazz” in Lithuania, “Nomme Jazz” and “Jazz Kaar” in Estonia, “MIDEM” in France, “Pori Jazz” in Finland, “Ottawa Jazz” in Canada, etc.