Latvian Radio Big band will perform together with an amazing drummer Jojo Mayer! 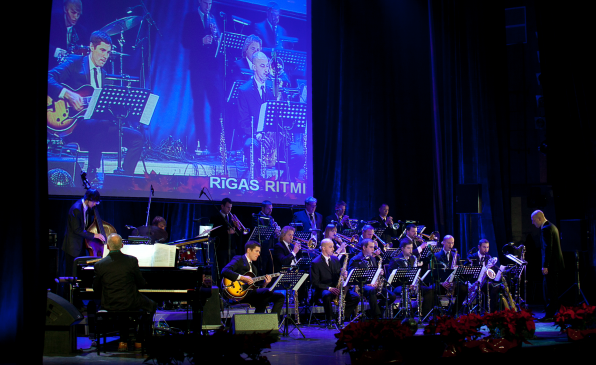 Swiss drummer in collaboration with Latvian Radio Big Band will present a special program „Buddy Rich 25th Anniversary”, which is dedicated to a world known drummer Buddy Rich on his 25th remembrance anniversary. Without doubt Buddy Rich is considered to be the greatest drummer that ever lived. Throughout his illustrious career he played with most of the legends of jazz - Art Tatum, Louis Armstrong, The Count Basie Orchestra, Dizzy Gillespie, Miles Davis, Benny Goodman, Artie Shaw, Ella Fitzgerald and Stan Getz. Buddy was also widely recognized for his work with his own big band. Concert dedicated to this famous drummer is going to be a great satisfaction to all admirers of jazz music and Buddy Rich. It will also be a great chance to see and hear how the elements of classical jazz meet the modern tunes.

„Latvian Radio Big band is a great achievement to our culture,” says the Patron of Big band Maestro Raimonds Pauls. Big band continues exploring creativity in collaboration with world known musicians and vocalists. The reborn Big band has introduced itself as a great performer in the concert together with world-known vocalist Kurt Elling. The next concert was held in Latvian National Opera with Italian virtuoso vocalist Roberta Gambarini. Performing in other concerts as well, including one dedicated to the anniversary of the great Latvian poet Imants Ziedonis, Latvian Radio Bigband continues with a special program together with Jojo Mayer!

Drummer Jojo Mayer is known for his creative and innovative drum play, which makes him one of the best solo drummers in the world. He is regarded as one of the most advanced drum set players in the world. He displays a ton of finesse and control whenever he sits behind a kit. Jojo Mayer is known for bringing together jazz, drum’n’bass, jungle, and different contemporary musical influences. Jojo is also famous for his know-how to play the rhythms of programmed jungle drum 'n' bass music on acoustic drums.

Growing up in the influence of a musical environment Jojo is basically self-taught musician. At the age of 2 he got his first drum set and his first public performance took place in Hong Kong when he was only 3 years old. Mayer joined a professional band when he was eighteen. The Band was the Monty Alexander’s group which embarked on a European tour soon after he joined. The band performed in all the major jazz-festivals including the North-Sea-Jazz Festival, Montreux, Nice etc. While on these tours, Mayer got to meet jazz-greats like Dizzy Gillespie and Nina Simone who introduced him to the international arena.

Jojo Mayer admits that this program is a great professional challenge for him. It is for him important to remain authentic while still respecting Buddy’s epic musical heritage. Jojo haven’t performed with Big bands in 10 years and playing together with Latvian Radio Big band will be challenging for him. But still – entering the special environment of Big band performance - is the reason why he decided to participate in this program!