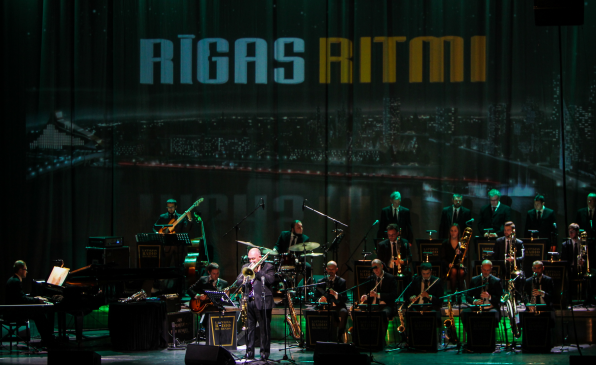 The long-awaited concert project Mare Balticum took place at Riga Congress Centre on November 28. The audience was excited for the virtuosity of the Australian multi-instrumentalist James Morrison and the high level of professionalism achieved by the Latvian Radio Big Band staff during the recent year. The sold-out concert ended with standing ovation causing Mr. Morrison’s return to the stage with a solo duo performance of playing both trumpet and grand piano in the same time.
Joy, excitement and genuine surprise could be read from the faces in the audience during the concert as they heard the unique jazz arrangements for such folk-songs as Auga, auga rūžeņa, Kas dārzā, kas dārzā, Bēdu manu lielu bēdu, Jūriņ’ prasa smalku tīklu, as well as Gūla, meitīna, Pūt vējiņi and Tumša nakte, zaļa zāle. For the ending of the concert James chose the hymn-like Pūt vējiņi that was arranged in ballad style.
Although the artist has only brief knowledge of the Latvian folklore and cultural historic roots, he, as a true citizen of the world, managed to catch the mood of those melodies by applying different style to each folk-song. Mare Balticum programme was made in a way that let us notice the characteristic features of waltz, Latin jazz and smooth jazz, swing and other music genres. James even composed an original piece entitled Mare Balticum especially for this project. The piece consisted of two parts, one is Klusums (Silence) and the other is Vētra (Storm), thus describing the changing, unforeseeable and ambivalent nature of water. In between the compositions James shared also his stories about music, life and his interpretation of folk-songs and Latvian folklore.
Within this project James Morrison together with Latvian Radio Big Band was able to prove that distance and differences of cultures do not matter in music and art – in this concert they reinforced the distant and also the historic ties that unite Australia and Latvia.
The concert programme Mare Balticum will take place also tomorrow, on November 29, at the concert hall Gors in Rēzekne at 6:00 p.m.
This project concluded the series of concerts of the Festival Rīgas Ritmi 2014 with the support from Rīga 2014 (Riga 2014).
Follow the information about concerts in 2015; we will be happy to see you!