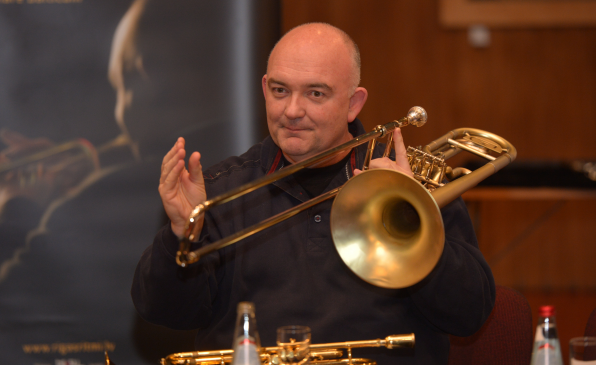 Trumpeter James Morrison, who has arrived in Riga to perform together with the Latvian Radio Big Band in Riga Congress Centre on November 28 at 19:00, will release an album with his own arrangements of Latvian folk songs. As Maris Briezkalns (Māris Briežkalns), the leader of LRBB and head of international musical festival “Rigas Ritmi”, stated at the press conference on international project “Mare Balticum”, arrangements created by Morrison, which will be performed at the concert together with the big band, will be recorded in CD format and the musician will take it with him to Australia in order to prepare the album for release.
Thus Latvian folk music in new sounds will be spread all over the world, said Mr.Briežkalns. Morrison’s composition inspired by Latvian folk songs will be the head song of the project.
Mr.Morrison said that jazz musicians at their concerts usually play either “standards” or their own original music, but this programme will be different.
““Standards” often played by jazz musicians, initially were the melodies of American musicals. It was jazz musicians who made them “standards” and well known all over the world, they presented these melodies from another side. If in American music the richest place where to look for melodies are musicals, then in Latvian music it is folk songs. They are not so well known beyond Latvia, since mostly they are performed in their original version. As I have no conjunction with Latvian culture I can look at these songs from a different point of view. May be if jazz musicians did not turn to playing musicals melodies, these also would not become so popular”, - said J.Morrison about the project. He pointed out that in his arrangements he based on those things which he himself caught in folk songs.
When asked, which of Latvian folk songs was his favourite one, Mr.Morrison answered that for him each song is like a child, and loved equally. Some songs corresponded more to a playful mood, others – to a different mood. There was not a single song which the musician did not like. “While I am playing some song it is the only one that exists, and that is why it is the best”, thus J.Morrison described music performing.
The musician mentioned that it would have been much easier to make his own programme, but arranging of Latvian folk songs turned out to be much more interesting and much more original. “Here on the stage in Riga will be together the Latvian big band and an Australian soloist, so we will play Latvian music in adaptation of an Australian composer. Why should we play American “standards”? – pointed out James Morrison.
Mr.Briežkalns said that he is not afraid of praising too much the forthcoming Morrison’s concert, since there is no other musician who could learn to play any instrument as easily as James Morrison. Besides he will perform an original concert programme accompanied by an experienced big band, added Mr.Briežkalns.
As Diana Civle (Diāna Čivle), head of foundation “Riga 2014’ said, arrangements of Latvian music whom another point of view are always a special occasion, that is why it was included in the manifold programme of “Riga 2014”. “A unique feature of this project is the fact, what James Morrison has caught and developed in this music. Any of his interpretations of a melody could be an event”, pointed out Ms.Čivle.
J.Morrison has arranged such songs as “Auga, auga rūžeņa”, “Kas dārzā”, “Upe nesa ozoliņu”, “Tumša nakte, zaļa zāle”, “Pūt, vējiņi!” and others – on the whole more than ten compositions.
A day before his concert in Riga J.Morrison will give a master class in the Latvian Radio 1 Studio at 11:00 on November 27.