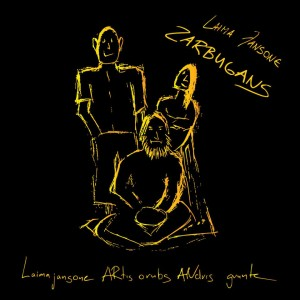 Rigas Ritmi Festival offers the exclusive CD “Zarbugans” presentation concert by authors Laima Jansone, Artis Orubs and Andris Grunte at Latvian Radio on 12 November!
The trio first appeared on stage at Rigas Ritmi Festival in 2012, when Latvian folk instrument kokle player Laima Jansone performed together with percussionist Artis Orubs and bassist Andris Grunte. The trio revealed a new melodic synthesis, unique and uncommon to jazz music. “All About Jazz” called the project “the find of the Festival”, as well as foresaw a prosperous future to it. During Rigas Ritmi Festival in 2013, the audience had the chance to witness the trio’s new concert programme, called “Zarbugans”. This once again drew the attention of the influential “All About Jazz” – music expert and journalist Bruce Lindsay said that he was not wrong before by foreseeing the project’s longevity. The trio continued to impress with the unique synthesis of modern and traditional music, joined by the extraordinary stage layout and visual presence of musicians.
It is time to once again present this special Rigas Ritmi Festival project and the unique pieces of “Zarbugans” to others. Musicians will perform at the Latvian Radio studio 1 on 12 November, where they will give an exclusive performance to an audience of a selected few.
The musical message of Laima Jansone, Andris Grunte and Artis Orubs aims to overcome the limits set by their instruments, therefore disclosing a new and parallel universe, which Laima herself calls approaching a planet to still be explored. The foundation of the project lies in three entirely different instruments and personalities, which is the thing that allows these musicians to find a common language through the enchantment of sound. The unique line-up is a challenge, because there simply is no other such makeup in the world of music, therefore the goal of the trio is twice as challenging, because along-side music, they must also create the ideological concept of the trio. The album is made of original pieces, influenced by both – jazz and folk.
In Summer already percussionist Artis Orubs revealed that the project could provoke two sorts of emotions – some might enjoy it, but others possibly might not understand it, as the musical synthesis and sound solutions are based on unique and unprecedented practice. To discover what this so-called “Zarbugans” exactly is, as it is not only the name of the album, but also an unique, specially created instrument, one should first see and hear it for themselves. The “Zarbugans”, same as the mystical kokle and nuanced contrabass, adds to the trio’s original and internally contrasting essence.
“The interplay between a jazz musician and a folk musician in finding common ground cannot possibly be easy, yet it allows to step back from jazz standards…” - Ģirts Pavēnis, jazzmusic.lv
Only 50 tickets are available to the show, as well as the honoured album “Zarbugans”, signed by Laima Jansone, Artis Orubs and Andris Grunte, will be available for a special price.
A live recording of the concert will be held by and for Latvian Radio.
Tickets available at “Bilesu Serviss” box offices and on-line: www.bilesuserviss.lv
Don’t miss a great performance!