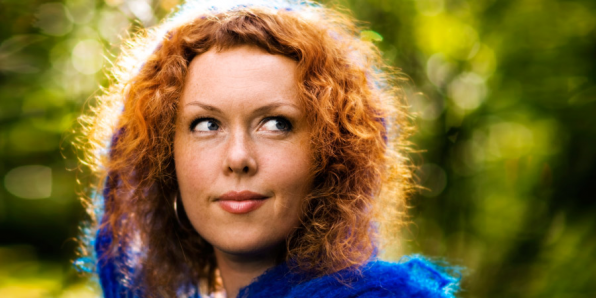 Outstanding Norwegian jazz singer and composer Kristin Asbjornsen and bass player Gjermund Silset will perform in Riga, as part of the concert series “Art of Riga Jazz”, on December 2 at 7:00 PM at Latvian Radio 1 Studio.
"Radio France" has called her one of Europe’s most original voices of today. Asbjornsen’s unique and extravagant style, which has received overwhelming international response from critics and audiences, combines elements of jazz, spirituals, African music and world music. Her voice is rich with contrasts and dynamics – from melancholy to a devilishly strong energy.
“Beautiful and completely without pretense. Whoever is not moved by this music, needs to get a new heart,” – Norwegian newspaper “Dagbladet” says about Asbjornsen’s last album “I’ll Meet You in the Morning”.
In Riga, Asbjornsen will perform together with bass player Silset from her ensemble. They tour together Europe, performing songs from Asbjornsen’s last albums “I’ll Meet You in the Morning” (2013), “The Night Shines Like the Day” (2009) and “Wayfaring Stranger - A Spiritual Song Book” (2006), as well as introducing new melodies. Different music styles are woven together in their repertoire - soul music, Afro American gospels, West African dance rhythms, Nordic contemporary jazz and contemplative spiritual music.
Latvian jazz vocalist and pedagogue Inga Berzina says that Asbjørnsen’s music leads to a plentiful journey of changes, where Norwegian and African sound colors meet: “Unique voice, which surprisingly changes from brittle and bright to the sound, which is similar to Janis Joplin’s voice. African instrument kora makes the performance authentic, natural and full of unique emotional experience. It’s a voice, which will be appreciated by the world music lovers and by all who are looking for retreat from traditions in music”.
“Her interpretations are so finely rendered, so tender and powerful they almost cause pain. The feeling is of being held in an embrace, following lines of history and of arriving in a safe haven. Held by Asbjørnsen’s warm yet keenly textured vocals and the metallic timbre of the guitar, these African-American spirituals come with a keen intimacy that both moves and stuns,” - writes Norwegian newspaper “Dagens Næringsliv”.
Jazz singer Ieva Kerevica compares Asbjornsen’s voice tinge to gentle lullaby singing, mixed with savagery and sharpness. “Extravagant personality, full of live energy and vitality. Scandinavian, Norwegian charm. When I listen to these deliberative compositions, I’m ensnared into their sense,” says Kerevica.
Asbjornsen’s album “Wayfaring Stranger - A Spiritual Songbook” has received a Platinum disc, but her album “The Night Shines Like the Day” - “Spellemannprisen” (Norwegian Music Awards equivalent to “Grammy”) and the prestige “Babel Med Mondomix Award” prize. She has also received “Konon Prize” for the best film music.
More information about artist: www.kristinasbjornsen.com
Tickets are available at www.bilesuparadize.lv . Price - 25 Eur.