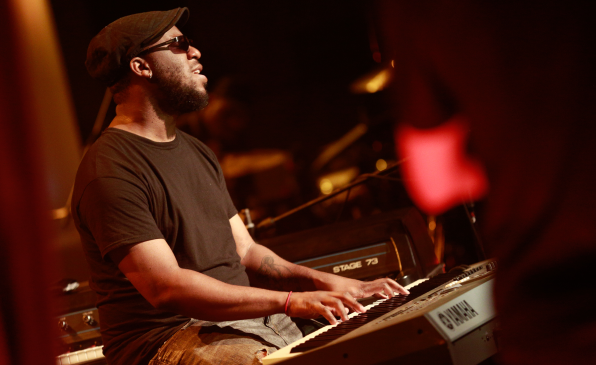 Festival “Rigas Ritmi 2013” is in full force and the second day was rich and eventful musically.
The 4th of July, which is also the US Independence Day, begun with the workshop at the “Latvian Radio” studio of the American piano virtuoso and marvellous composer Robert Glasper. The workshop was attended by young musicians, as well as other people of all ages, who had been eagerly waiting to meet the Grammy award and four-category “DownBeat Magazine” critics’ poll winner. The workshop turned into a vivacious conversation between the audience and the artist, who gave his input into the music creation process, as well as gave an inspiring musical performance that grasped everyone.
Leasure park “Egle” was host to the unique Latvian and Danish musician synergy Frank/Pashkevich Experience – the group merges jazz traditions with an unique originality. Listeners witnessed the powerful performance of Christian Frank’s tender musical nature, Deniss Paskevics’ expressive saxophone sound, Arts Orubs’ uniqueness and Kenneth Dahl Knudsen’s bass player talent. Gospel reggae singer Dominion Man performed at the outdoor concert also, offering an unprecedented world of feelings in the hot Summer night. The night fit the reggae rhythms, filled with positive emotions and deep lyrical context.
In the evening, Robert Glasper together with the musicians of his experiment played the concert at the Congress Hall. The vocals of Casey Benjamin and the modern fusion of lingering jazz notes rustled the venue right after the integral speech of the festival’s Artistic Director Maris Briezkalns. The experimental sound alternated lyrical piano improvising and a filigree jazz performance. The elevated audience did not want to let go, only to embrace the sensual African jazz singer Somi, who asked to join her on a musical quest to Africa by merging authentic sounds from different corners of Lagos in her songs and compositions. After lulling the audience with her mellow singing, Somi saved the best for the encore.
The first Missisippi Jazz Cruise successfully set sail with the young guitar wunderkind Andreas Varady, as well as the Riga Jazz Quartet with jazz vocalists from Europe. Only 15 years old, Varady surprised the audience with a trio that consists of his family – himself, his father, who is also the guitar player’s first music teacher, and his 11-year-old brother, drummer Adrian. The amazing trio played original songs of the Varady debut album “Questions”, as well as jazz classics, improved by the guitar player’s talent.
The Riga Jazz Quartet joins currently the most talented and outstanding jazz artists from Latvia, who played a programme together with Elina Viluma, Daniel Cacija and Laura Budreckyte.