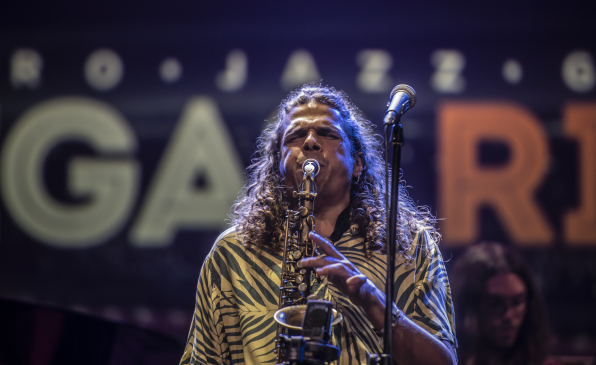 After four days of saturated musical programs, the 21st International Festival of Improvisation, Jazz and Global Music Rīgas Ritmi is over.
On July 3, the concerts took place in all four locations of the festival – VEF Culture Palace, Jersika Records Stage in the art center Noass, music house Daile and art space M/Darbnīca, on the terrace of which very well attended official jam sessions took place every evening of the festival.
Singer and saxophonist Antonio Lizana took care of the jazz evening in Spanish colors at VEF Culture Palace, together with the group, conjuring even warmer feelings, like the current Latvian summer. In the music house Daile, pianist Kristaps Vanadziņš took care of jazz moods closer to Latvian latitudes together with friends, this time including the colorful singer Ieva Kerēvica.
The Jersika Records Stage in the art center Noass also confirmed on the second day of its program that this tradition is worth continuing, offering content to the festival audience looking for a distinct musical alternative. On July 3, guitarist Jānis Ruņģis performed an improvised solo performance, also playing Rhodes Piano and clavicymbal, Lithuanian saxophonist duo Liudas Mockūnas and Arvydas Kazlauskas gave an expressive free-flight concert, but the jazz-funk party was organized by the vibrophonist Miķelis Dzenuška and the band Uzvaras bulvāris at the end of the evening.
And the success story of the festival days was once again brilliantly created by the art space M/Darbnīca in the von Stricka villa quarter, offering both a concert by drummer Ivars Arutyunyan Quartet and a jam session on the outdoor terrace, which was also attended by several festival artists from other stages.
In total, 16 different bands and projects from five countries of the world performed at the festival this year.
"We are really satisfied with the work done, which, taking into account the presence of various epidemiological restrictions, this time required double strength," admits the artistic director of the festival Māris Briežkalns. “With its 21st edition, the festival Rīgas Ritmi has proved that it can provide a festival of quality music lovers in any conditions and the festival became a bright pearl in the declining cultural life of the Latvian capital, so we will start working on next year's festival with confidence in mind and heart… ”