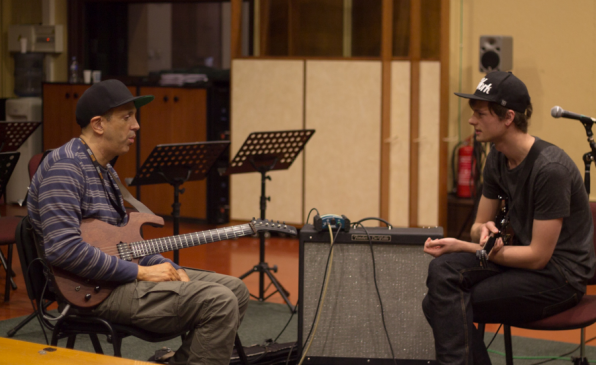 A passionate Argentinian interpretation of a mix of Romani and tango music, an evening saturated with jazz and funk at the station square next to the Origo shopping centre and 2 masterclasses by American musicians rich with information and music. That is what the first day or July 1 at the 15th Rigas Ritmi Festival looked like.

The festival was unofficially opened at midday by masterclasses at the Radio Latvia 1 studio by the guitar player Dave Manley and singer Taphy Spencer. The audience was mainly comprised of students – singers and musicians of both genders. They asked questions at first timidly and later boldly as well as played some music and sang some songs together with the festival guests.

Dave apologized – he had not slept enough as he had spent a whole day on the way from Austin, Texas and the airline had lost his luggage. Fortunately, his guitar along with all the effects pedals and cables was not in it so it did not affect the masterclass. According to singer Ralfs Eilands, the most well-known participant of masterclasses on the local music scene, he learned valuable lessons from what both musicians told and appreciated the fact that Dave suggested and demonstrated mobile application for musical training iReal. Ralfs was also brave enough to sing a heartfelt version of James Brown’s It’s A Man’s Man’s Man’s World.

Taphy looked and sounded livelier than her colleague Dave and passed over the guitar to him to sing some songs including the standard Summertime and Don’t Know Why by Norah Jones. The most valuable suggestions from her? Have your own recording studio to avoid the high costs and drink a lot of water because it helps your voice.

The official festival opening began at 5pm with a free concert at the station square on Origo Summer Stage which gathered around 200 listeners on seats and a number of passers-by. After a short speech by the Creative Director of the Festival Maris Briezkalns (Māris Briežkalns) the stage was opened by a joint project of the prizewinners of Riga Jazz Stage and backing band Riga Jazz Presents: keyboard player Viktors Ritovs, guitar player Marcis Auzins (Mārcis Auziņš), saxophone player Davis Jurka (Dāvis Jurka), bass player Toms Lipskis, and drummer Artis Orubs as well as singers Kristine Praulina (Kristīne Prauliņa) and Malene Kjaergaard from Denmark who said she felt like home at the festival.

The programme featured songs specially composed for Kristine by Maestro Raimonds Pauls, compositions by Malene, and compositions by Miles Davis. Both ladies closed the performance with a duet of Stevie Wonder’s sunny hit Isn’t She Lovely.

After the break when the host of the show actor Kristaps Rasims announced a number of contests for the audience, the local jazz-funk nonet Bunch of Gentlemen hit the stage with an evening party performing their own compositions and those of legends of the genre. Some of the most daring listeners started dancing. In the second half of the performance the elegant jazz-funk gentlemen were joined by the charismatic singer Arta Jekabsone (Arta Jēkabsone).

The first day of the festival closed with an expressive and nuanced show performed by Argentinian trio Zingaro at 9pm at Kanepe Culture Centre. Guitar player Alejandro Montero, violin player David Macchione, and accordion player Alexander Garate played with features of Romani and tango music around French gypsy melodies and hotblodded dance moods of their native land. The audience gathered at the KCC courtyard obviously warmed up, while the musicians admitted they were a bit cold because they had left home at +40... The show filled the intersection of Lacplesa and Skolas streets with the sound of music and attracted more and more passers-by which only served as proof of the high level of professionalism of the musicians and their ability to speak to a very diverse audience musically.

There are still 3 days to go at the 15th Rigas Ritmi Festival full of concerts and masterclasses so come join us and feel the rhythm!