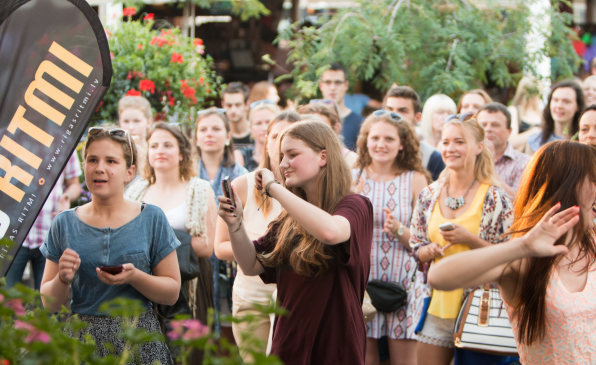 Finally, Riga will see Raul Midon and also duo “Fresu / Bonaventura”, together, as well as the second day of the festival showcase programme presents cello virtuosos “DAGAMBA”, among others, as well as different concert venues host Bunch of Gentlemen, Kristīne Prauliņa & Friends, Ralfs Eilands & PeR, The Presence of JR. The banks of the river Daugava presents “Riga Jazz Presents” and the morning is kicked off by two workshops – all of this took place on the third day of the festival, 3rd of July.

The day, as usual, begun at 10.00 am with a workshop in the Latvian Radio Studio 1. First to host the workshop was blind multi-instrumentalist Raul Midon, who presented different guitar playing techniques, as well as gave valuable advice – the workshop was attended by such well-established and known Latvian artists as guitarist Kaspars Zemītis and vocalist Ralfs Eilands.

At 12.00 am, the second workshop of the day begun, hosted by vocalist and guitar player Allan Harris. Unlike it was promised before, the second workshop was not hosted by Allan’s evil twin, as promised, but the same intelligent, informative and humorous pedagogue and master or arts – just dressed a little more summery. The master sang with workshop participants and finished the class together with pianist Viktors Ritovs, performing Nat King Cole’s “I Wish You Love”.

The second and final day of the festival’s showcase programme begun at 14.00 pm, at the New Auditorium of the Riga Congress center – the programme presented Kristine Praulina & Friends (now going by the name of Alaska Dreamers), Sus Dungo, DAGAMBA and Catalyst.

The second double bill of the festival at the Riga Congress Hall presented the Italian duo – trumpeter Paolo Fresu and bandoneonist Daniele di Bonaventura. The duo took the audience on a voyage through the music of different nations from South America to that of old-Europe. Though at first they vouched to not perform Argentinian tango – in the end, their musical travels stopped in Buenos Aires.

After a short break, the stage welcomed the long-awaited special guest of the festival, American artist, guitar player and singer Raul Midón. Though it was a solo performance, the audience had the feeling that they are listening to a trio – a guitarist, trumpeter and a percussionist. Raul perfectly mimics the sounds of the trumpet, while his guitar-playing technique includes elements of playing percussions. Midón even performed a piece on the piano. The audience gave him a standing ovation and hopefully he will compose that piece, named “Latvia”, that he mentioned in the morning’s workshop, about everything that he experienced.

Meanwhile, the open-air leisure park “Egle” presented Bunch of Gentlemen with the lovely vocalist Arta Jēkabsone, followed by the energetic performance of Ralfs Eilands & PeR. Kaņepes Culture center welcomed The Presence of JR – the band’s leader Jānis Ruņģis closed the night by playing the clarinet.

There is still one day left – don’t miss the concerts and feel the rhythm!