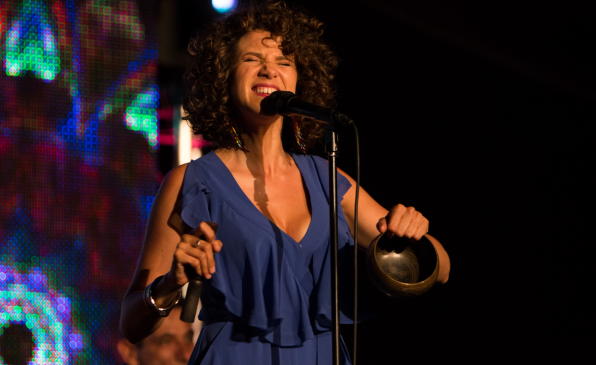 The final double concert at Riga Congress Centre with the Cuban pianist Ramón Valle and the American jazzman Allan Harris with Latvian Radio Big Band participating, wonderful concerts at Leisure Park EGLE, KKC and Daugava Concert Hall, two more equally excellent masterclasses and a panel discussion with the Showcase programme experts. This is what the fourth and the final day of the Festival was like.

The morning started as usual at 10:00 at the 1st Studio of Latvian Radio with the masterclass of Ramón Valle where the attractive and super positive Cuban artist demonstrated the typical basis of his piano play, i.e., a combination of European harmonies and Cuban rhythms, and he also told the audience about the manner how he composes and other fine details.

He was followed by the French singer Cyrille Aimée and her guitarist Michael Valeanu who demonstrated examples of easy team-play between musicians in an attractive manner and sang together with the masterclass participants.

At 14:00 a panel discussion was carried out at the same place about the opportunities of new musicians to become recognized by larger audiences in the business. The panel was hosted by Bruce Lindsay, a journalist from the prestigious British jazz media All About Jazz, and the participants included Kevin Le Gendre, a journalist from the British media Jazzwise and MusicWeek, Patrice Hourbette, the director of the Luxemburg music export organisation music: LX, Isabelle Pfeifer, the representative from the Austrian music agency MIOOOW, Eric Addeo, the director of the U.S.-based booking agency Addeo Music International, Paul Pace, the director of programs of the club Ronnie Scotts London Branch, and Francesco Martinelli, an Italian music journalist. The prominent experts expressed the opinion during the panel discussion that there is no common formula for new musicians to succeed and that luck is very important; however, they emphasized that in the same time both the local audience should be gathered and foreign markets should be penetrated using any available methods to become more popular

The panel answered also the last question from the audience, in which it was interested the most, and namely, what do the guests think about the local artists they saw at the Showcase. Among the answers, the opinion of Kevin should be emphasized more, and he said that he had the most pleasant surprise by Sus Dungo girls who dared to sing in Latvian, because that let them to represent the colourful feel of the local music the best, and singing in Latvian should not be avoided. Paul commended the format of Bunch of Gentlemen whose content was rich, entertaining and defined perfectly, where everything was clear and ready for the stage. Bruce commended the performance of Alaska Dreamers or Kristīne Prauliņa & Friends, which reminded him of the best traditions of blues festivals.

The day of the concert began with the grand concert at 19:00 at Riga Congress Centre started by Ramón Valle, whose program contained unexpectedly serious and slow compositions, and he played even the cover of Leonard Kohen's Hallelujah. Still, the concert had some Cuban rhythms and Ramone ended the concert with a rumba.

After a short break the stage got fully occupied by Latvian Radio Big Band with Sinfonietta Riga string band. But in the middle of all of it there was charismatic New York jazzman Allan Harris who performed the programme of Nat King Cole songs with all his heart and as naturally as possible. He complimented the local musicians once every while and the compliments did not sound like flattering. He had really great time on the stage and let the audience have a wonderful evening. The soloists of the Big Band took their stands on the stage one after another, and the created impression on the stage was absolutely Hollywood-like and magnificent. The concert ended with standing ovations and Harris demonstrated equally powerful guitar play when he sang Unforgettable as encore. What else could he sing?

In the same time, the experimental American-Latvian r’n’b co-project Spencer, Manley & Feds performed at 20:00 at Leisure Park EGLE, and they had performed also on the second day of the Festival at Daugava Concert Hall; Spencer, Manley & Feds was followed on the stage by Alaska Dreamers or Kristīne Prauliņa with her large group of friends who were complimented by Bruce and they created an excellent atmosphere of blues-like soul rock.

The Luxemburg combo Reis / Demuth / Wiltgen began their performance at 21:00 on the second floor of KKC and they offered a jazz programme of quite powerful avant-garde direction.

The concert programme of the Festival and the Festival as such ended with the performance of the French girly lady Cyrille Aimée of fun jazz (her own definition) at the completely sold-out Daugava Concert Hall. The perfectly warm evening over the nightly Daugava waters was filled with both jazz and gipsy musical moods. Michael Valeanu added a particular feel to the concert when he performed toned-down and exquisite Guild guitar parts. As encore Cyrille sang her own version of Caravan, which, thanks to the gipsy atmosphere, could be named Gypsy Caravan as well, and this was probably the most interesting version of this Duke Ellington’s standard. Excellent ending for the 15th Rigas Ritmi Festival!