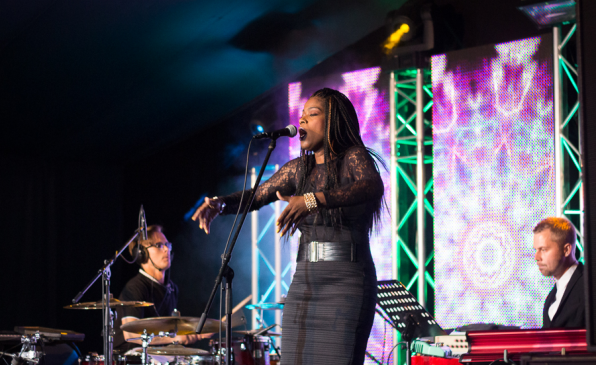 The total of six venues, i.e., the Large Hall and the New Hall of Riga Congress Centre, Leisure Park EGLE, Daugava Concert Hall, KKC and Origo Summer Stage at the central station square, hosted 29 concerts, and eight of them were free. The participants of the Festival included 22 solo artists and bands of musicians with members representing the total of 12 countries. The audience of the concerts was approximately 7 000 attendees.

There also was the Showcase programme, where the local artists had the opportunity to represent themselves to foreign experts, including Bruce Lindsay, a journalist from All About Jazz, Kevin Le Gendre, a journalist from Jazzwise, Paul Pace, the director of programs of the club Ronnie Scotts London Branch, and Eric Addeo, the director of the international booking agency AMI. After the Showcase programme, the jazz funk band Bunch of Gentlemen consisting of nine men and the soul rock project of Kristīne Prauliņa Alaska Dreamers, where the singer was accompanied by nine more men, were the most commended ones.

All participants of the Festival gave positive comments about Riga and the Rigas Ritmi Festival confirming that his Festival has already fully integrated into the list of the most important European jazz and world music festivals.

“Firstly, 15 years for a festival is a commendable achievement! Secondly, Māris (Briežkalns) is working really hard. I spent several days with him and felt his passion about what he does. He has invited several people from the industry and welcomed everyone of them in very hospitable manner. He has opened the doors of your country for us in a really great way. And people here are generally similar to him. When I walked on the street, unfamiliar people greeted me, they were kind and friendly. This is a truly wonderful place.” – Allan Harris.

“I am in this Festival for the second time, and I love its atmosphere. People here are very friendly. Last time, in 2006, I also lectured in a masterclass, and there were great new musicians. The Festival is really exquisite. Even the weather is always nice!” - Buge Wesseltoft.

“The Festival is great, because it has a very good programme. The balance between the foreign and local artists is very good. The venues of concerts are well-thought of as well. The city as such makes a very good impression. If you come here from London, which is a huge city where you need public transport to get somewhere, you can feel the difference compared to the situation when you can walk from one concert venue to the next one. And you can arrive at a concert relaxed and with no stress. I have a special appreciation for that!” – Kevin Le Gendre.

Feel the rhythm and see you next year!