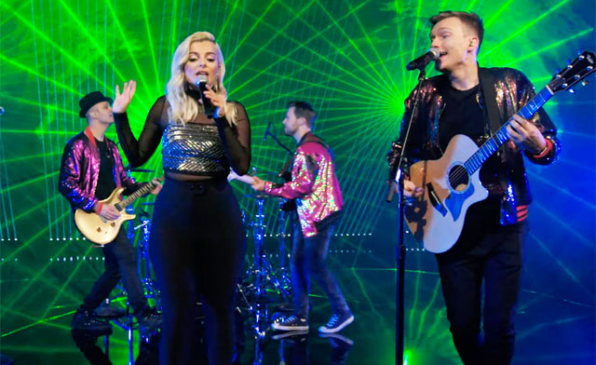 Latvian pop punk band "Double Faced Eels" (DFE) has made a good progress on the international video site "YouTube" music show "Best.Cover.Ever." 7. series. The band managed to conquer Albanian origin pop Bebe Rexha sympathy and get the opportunity to perform together with her. On the wave of success this week DFE released the new single "Can't Let Go".

The brand new music show "Best Cover Ever" for the first time came up on November 2017 at video streaming site "YouTube". Participants from all over the world vying to go on the same stage with international music industry stars.
In each series the show leader rapper Ludacris meets a guest from music industry like Demi Lovato, Katy Perry, Jason Derulo etc. As well each series gives the opportunity for two participants to compete for the chance to perform with one star and both of them come up with the star famous song cover. After the star and Ludacris ratings, the best participant receives a unique prize - the opportunity to collaborate with the series star and to make together the song in a unique way.
For each of the show's series applied thousands of participants from all over the world. Among them, the lucky one, who was invited to participate in Los Angeles filmed show, was "Double Faced Eels". The group represents Latvia and even more is the only band from Europe among the finalists. DFE rivals was talented duet “Two Less Lonely”. Our band performance of Bebe Rexha song "In the Name of Love" got Rexha and Ludacris sympathies and gave them the opportunity to perform together with the singer.
At the show's conclusion, the winners got the special award from the show and Bebe Rexha - paid a repeated trip to Los Angeles to give a private concert at the legendary club “Roxy Theatre” and present themselves to producers and local music industry representatives.
Using the opportunity, the "Double Faced Eels", at the same time with the show’s coming out, release the new single and video for the song "Can't Let Go", which was inspired by the lessons learned during the show.
"The song "Can't Let Go" is the reflection on people who are stuck in bad relationships. Regardless of your gender, age, and even, if it is about the two people in the relationship, or, for example, relationships with employers, teachers, etc. Sometimes we realize that improvements will not come, but you cannot take the decisive step," says the song words author Reinis Straume.