The concert of the drum guru from USA ended with ovation 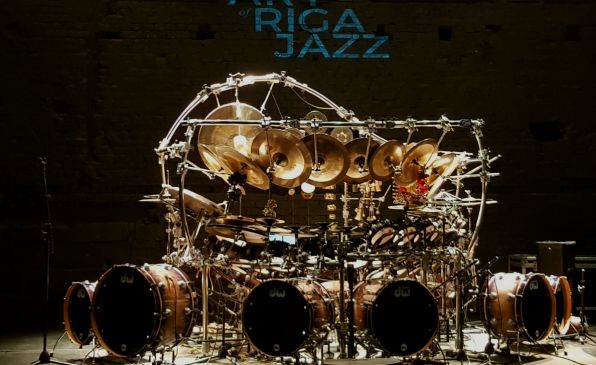 Terry Bozzio performed on world's largest tuned drum set and presented his album “Terry Bozzio – Composer Series”, which was available after the concert with autograph of the musician. The concert was made as a solo performance where Terry presented his own compositions.
Astonishing virtuosity that the musician showed on the world's largest tuned drum set led the audience into a unique sound journey with wild rhythmical and soft oriental mood compositions. Terry held full attention of the listeners during both almost an hour long parts of the concert, receiving applause and ovation after each composition. The musician told short stories about the compositions that had been played and about the process of how some of them had been created. Both parts of the concert had different mood and style.
It was nice to meet a young generation among the audience, who is learning to play drums. Both young and professional drummers found the concert as a great one.
Musicologist Boris Avramec said:
“This is a unique event in Latvia, unforgettable concert. Thanks a lot to organizers of the concert for giving us an opportunity to see, feel and enjoy all this LIVE in Riga”.
After the concert people moved closer to the stage to see the drum set and take photos of dismantling process.
See you very soon on November 23 at Latvian Radio Studio 1 at 7 pm, where unique and elegant British soul & jazz singer ALA.NI will perform together with guitar virtuoso Thomas Naïm.