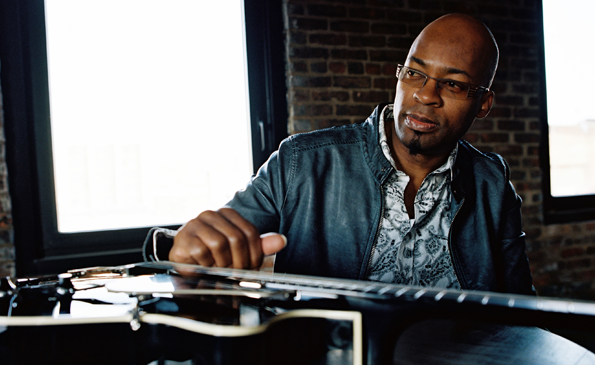 The USA guitar virtuoso Lionel Loueke will be performing in the concert series ‘Art of Riga Jazz’ On the 1st of December at 19.00 in Music House ‘Daile’.
Loueke has been denoted a painter of music by the legendary jazz pianist Herbie Hancock and gotten great recognition for combining elements of traditional African music with modern jazz. Lionel will be visiting Riga together with the guitarist Roberto Cechetto and drummer Nasheet Waits.
‘The artists refined and undoubtedly original playing, in which rhythm plays a strict role, alternates with his own vocal improvisations sung in the original language as well as rhythmic shape, thus forming a one of a kind synthesis between native African music and the expression of modern jazz. I recommend attending this concert.’ says guitarist Mārcis Auziņš, adding that the music of Loueke won’t leave anyone –  even the most experienced musician –  indifferent.
Lionel Loueke grew up in West Africa, Benin, where he played percussion in childhood. He started playing guitar only at the age of 17, influenced by his older brother. The artists' origin has had an incredibly strong effect on his sound and style, which is clearly visible in his complex tempos, unique vocals, and the percussion and phrasing techniques in guitar.
In his compositions, Loueke often combines instruments with his own vocal melodies. ‘Popmatters.com’ describes this vocal manner as ‘often falling outside the style of classic jazz, it is rhythmic and at the same time fluent – it nicely complements his guitar.’
Video: https://www.youtube.com/watch?v=baNcDSYvYk4
Lionel has performed together with well-known musicians such as Herbie Hancock, Terence Branchardm Charlie Haden, Gretchen Parlato, Richard Bona, Dianne Reeves, Wayne Shorte and many more.
Loueke will also be leading a workshop in Riga on the 1st of December at 10.00 A.M. in Latvian Radio Studio no.1.
Applications and additional information can be received via e-mail - workshop@rigasritmi.lv.
Tickets available at www.bilesuparadize.lv .Cost – 15-20 Eur.
‘Art of Riga Jazz’ – the art of being unique and speaking in the language of music – this will be demonstrated by every musician performing in the ‘Rīgas Ritmi ’ concert series ‘Art of Riga Jazz’.
Don’t miss a great concert!