The Second Concert Day of the Rīgas Ritmi Festival 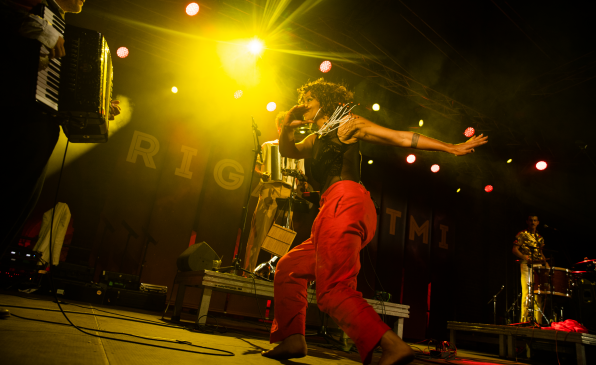 The second concert day of the international improvisation, jazz and global music festival Rīgas Ritmi was held on the evening of July 1 with the performance of Clark Beckham, Ayom and several other great artists.
The main concerts of the festival took place in the garden of the Riga Cathedral, where Clark Beckham performed, as well as the group Ayom. The 30-year-old super-talent Clark Beckham perfectly demonstrated both his wide-range voice, melodic songwriting talent, and strong stage charisma, which already in 2015 allowed him to become one of the favorites of the jury and viewers of the popular TV show American Idol. It was not for nothing that he was also noticed by the legendary producer Quincy Jones, signing a management contract with Clark Beckham.
The party held in Brazilian and other southern rhythms was provided by the international global music group Ayom, which is known as the long-distance musical brigade that crosses the Atlantic Ocean from Brazil to Angola and Cape Verde, but with a distinct Mediterranean identity. The group's name is taken from Afro-Brazilian mythology, which refers to the Lord of Music who taught people how to play music and sing. Ayom, a group based in Portugal, proved their title true to form, making the audience sing along and dance along. The main face of Ayom is vocalist and percussionist Jabu Morales, but accordionist Alberto Becucci, guitarist Ricardo Quinteria, bassist Francesco Valente, as well as percussionists Timoteo Grignani and Walter Martins also play an equally important role in the overall sound.
A real party atmosphere also reigned in the Noass art center on the AB dam, where the Jersika Stage operates. There, the presentation concert of their new album Organic City in true funky style was performed by Atis Andersons Organ Trio, then the group Lupa took care of the electro-jazz party in neo-fusion style, while the evening was closed explosively by the expressive British jazz, funk and soul music singer and multi-instrumentalist Xantoné Blacq with his quartet.
In the Riga Jazz Lounge bar in the Radisson Blu Latvija hotel, the Italian singer Valentina Fin, laureate of the Riga Jazz Stage 2022 competition, gave a delicately artistic concert, and later the official jam session of the festival took place there together with the trio of double bassist Andris Grunte, or AG Trio.
On the morning of July 1, in the 1st studio of Latvian Radio, the leader of the group Ayom Jabu Morales met with the music students and other interested parties together with the percussionists Timoteo Grignani and Walter Martins, talking about Brazilian rhythms and logically also involving those who came to the master class in musical activities.
Photo gallery