The Main events of the Rigas Ritmi 2020 are still ahead 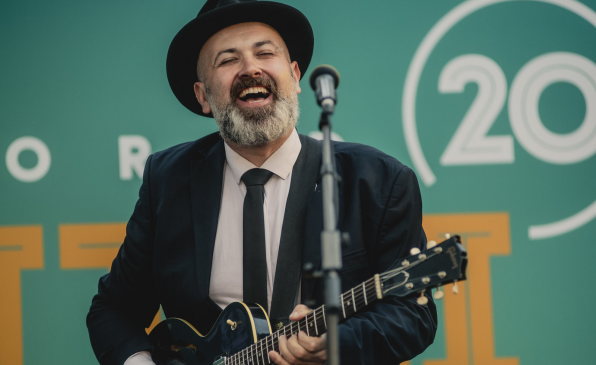 The international improvisation, jazz and world music festival Rīgas Ritmi celebrating its 20th anniversary from July to December this year. The summer concerts of the festival have just ended, which took place from July 2 to 4 in the Old Riga open-air restaurant No Problem and in the jazz cafe Sidrērija.
The emotionally saturated concerts in No Problem were given by the powerful and original Latvian new generation guitarists Reinis Jaunais and Rihards Lībietis with their bands, as well as the charming singers Dināra Rudāne and Rūta Dūduma with their accompanying ensembles.
The closing evening of the festival's summer concerts on July 4 was especially full of emotions and great energy, when the band Very Cool People and singer Aija Andrejeva performed at the open-air restaurant. The program started with the music of band's upcoming instrumental album of jazz funk, Balkan and other musical influences, currently called Rambo, and continued with a tribute program to legendary Janis Joplin, whose songs were perfectly performed by Aija Andrejeva in her style together with Very Cool People.
High-quality musical concerts also took place in the Old Riga jazz cafe Sidrērija, where Finnish pianist Tuomo Uusitalo with his trio, his colleague Edgars Cīrulis with his quartet, and a project Riga Jazz Stage Talents by participants of jazz performers competition Riga Jazz Stage performed. Also, the official jam sessions of the festival took place every concert evening in the premises of Sidrērija or the former Trompete.
“I would never believe that a great festival program can be created only from Latvian artists, but its happened!” admitted the festival's artistic director Māris Briežkalns. “The nine concerts of the 20th anniversary festival Rīgas Ritmi in the summer session showed how talented, professional, interesting and surprising our artists are. Thank you to them and also to our loyal audience! The EFFE quality label of the European Festivals Association is justified. And see you soon at the anniversary festival’s winter session concerts!”
“It’s fantastic that Rigas Ritmi is one of few festivals this summer I know about, which took place and were not cancelled,” said writer for German jazz magazine Jazzthetik Christoph Giese attending this years festival. “Considering that it had to be a different edition as was planned, I think it was a success. People loved it, it was entertaining, it was fun, and I heard things I didn’t expect like the band Very Cool People together with Aija Andrejeva in tribute to Janis Joplin. It was very nice experience with those funky guys in the background and a powerful singer in the front.”
“It’s amazing how Rigas Ritmi turned the challenges of recent crisis to a positive live music experience for citizens and guests from abroad, emphasizing the power of local young musicians,” said Laima Slepkovaite, jazz program host in Lithuanian national radio LRT Klasika also visiting the festival in Riga. “What I heard was clear indication of healthy, strong, very alive and original musical scene. It’s great to see and to hear Riga so groovy and funky like Very Cool People, so searching and experimenting like Reinis Jaunais, so rocking like Rihards Lībietis Orchestra, so playful and daringly improvising like Rūta Dūduma and so charming like the bright voices of Dināra Rudāne or completely different in style but equally impressive Aija Andrejeva. Asuming that’s only a little part of what Riga has to offer, it’s quite an impressive presentation, which I enjoyed a lot.”
“I have been at Rigas Ritmi Festival few times in the past years,” said the only non–Latvian performer at the festival this summer, Finnish pianist Tuomo Uusitalo who now resides in Latvia though. “It’s always very working, nice festival. And it’s a great city festival. Of course, it’s a beautiful thing to see that it’s happening this year as well. My gig was great at festival also. It was really great to play outside in the courtyard of jazz cafe Sidrērija. A lot of people came to hear that. In general I was very fond to play a gig after more than a month of not playing for actual people. And the jam session was really good!”
Rīgas Ritmi 2020 main concerts will take place this year at the end of the year at VEF Culture palace. On November 19, Latvian Maestro Raimonds Pauls will offer a special dedication to the anniversary of the festival, presenting a fresh jazz program Walk around Riga with his trio, which will also be released on the album.
On December 10, there will be  the performance of the new star of pop jazz and soul music Clark Beckham. A day later, he will also perform in the Olainfarm Jazz Nights series at the Kaļķu vārti club, where the talented Latvian guitarist Gints Smukais will also play.
On December 13, Cuban jazz star Roberto Fonseca, together with the popular Cuban R&B singer and hip-hop artist Danay Suarez, will return the feeling of summer sun to Latvian viewers at the VEF culture palace.
Tickets for the closing concerts of the 20th anniversary of the festival Rīgas Ritmi can be purchased at bilesuserviss.lv.
Photo galleries:
Day 1
Day 2
Day 3