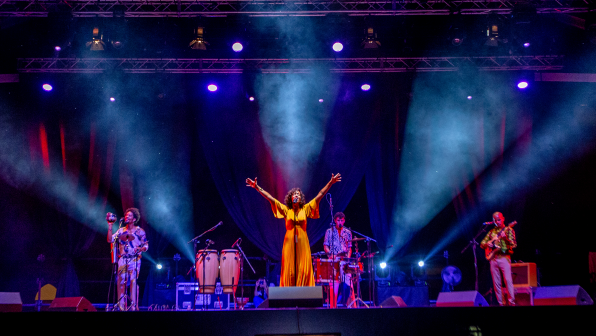 Rīgas Ritmi 2022 will take place this year from June 30 to July 2. Both jazz and global music artists from abroad and Latvia will perform at the Riga Cathedral Garden in Riga – Ayom from Portugal, American singer Clark Beckham, Italian singer Valentina Fin, Latvian band Very Cool People with singer Paula Saija and other artists.

The international global music band Ayom from Portugal are called a brigade of musical seafarers that crosses the Atlantic Ocean from Brazil to Angola and Cape Verde, but with a distinct Mediterranean identity. The name refers to the Lord of Music in Afro-Brazilian mythology. In it Ayom taught people to play music and sing…

Clark Beckham is American singer-songwriter  30-year-old super talent who has been represented by the management company of the legendary producer Quincy Jones for five years. Thanks to his wide-ranging voice and strong stage charisma, Beckham became one of the favorites of the popular TV show American Idol in 2015.

Italian singer Valentina Fin is a laureate of the Tomorrow's Jazz Prize, a competition for Italian jazz artists organized by the Venice Jazz. She is a participant in the Riga Jazz Stage 2022 competition as well. Together with her band, Valentina offers free-flowing contemporary jazz that addresses both young and experienced jazz audiences.

The Latvian jazz-funk band Very Cool People will offer a new program together with singer Paula Saija at the Rīgas Ritmi Festival 2022. The concert at this year's festival will be special because it will feature a completely new concert program with the young and talented singer Paula Saija, who has also performed with great Latvian Maestro Raimonds Pauls.

“Times are changing, the festival continues,” says its artistic director Māris Briežkalns. “Despite various difficulties, Riga simply cannot be left without music festival, which has already won its stable place on the map of world music festivals. Also this year, we will offer Riga and guests of the city a colorful and various program, which will include both experienced artists and new talents from different countries of the world.”

The main concerts of the festival will take place in the Riga Cathedral Garden.

The other locations of the festival will be announced together with its full program.