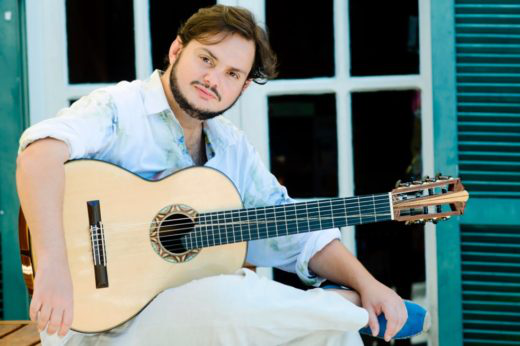 On the 29th of June, 9 pm, at Riga Cathedral Garden Yamandu Costa, a Brazilian guitarist, will perform for music lovers!

From June 29th to July 1st Riga Cathedral Garden will become an open-air concert hall and the central venue of festival „Rīgas Ritmi 2017’’. The first artist who will introduce open-air concert will be Yamandu Costa, who creates music with soulful passion, playful grace, and stunning virtuosity.

It is not an exaggeration to say that guitar has a leading role in Brazilian culture. Musical heritage is huge – from Heitor Villa-Lobos experiments in revolutionary modernism to Antonio Carlos Jobim bossa novas. From Baden Powell sambas to broad Odeir and Sergio Assad interests. Latest in this parade of stars is talanted guitarist and composer Yamandu Costa.

Yamandu has born in a musical family, his main instrument is famous Brazilian seven- string guitar. Yamandu started learning guitar play at the age of 7 together with his father, Algacir Costa, the leader of a music band ‘’ Os Fronteiriços’’.

Yamandu can be proud of his 15 studio albums and, of course, about Latin ‘’ Grammy’’ award which he has won. In 2012 Yamandu got “Cubadisco international award” for album “Mafua and Honorable Mention” and as well ‘’ ALBA’’ award for music album ‘’ Linda’’.

“One of Brazilian all-time greatest geniuses – Yamandu Costa – deserves the highest praise. Each time he delights even the most refined audience, his performance reflects very deep intimacy between himself and his guitar.” -  EYE FOR TALENT.

Festival ‘’ Rīgas Ritmi 2017’’ this year will take place from  June 28th to July 1st with the biggest novelty, highlighting the venue of the concert, an outstanding monument of architecture- Riga Cathedral Garden! On the 29th of June at Riga Dome Garden double concert- virtuoso of guitar YAMANDU COSTA and talented singer and composer DAYMĒ AROSENA.