Home > The Festival > News > You can be original in a cappella!

You can be original in a cappella! 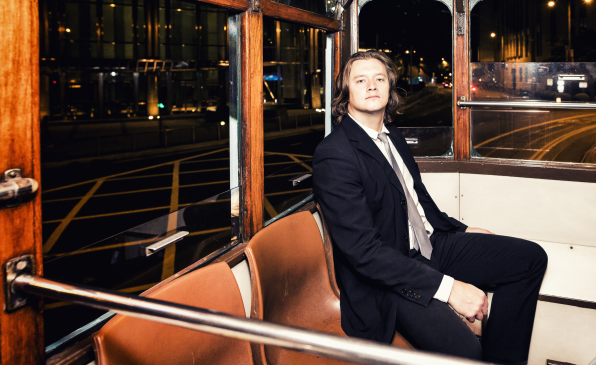 On December 10, at the Splendid Palace cinema, the Art of Riga Jazz improvisation and jazz concert series will feature internationally acclaimed innovative a cappella stars from six-man international vocal group Accent with its latest album's Christmas All the Way program.

Before their visit to Riga, we talked to one of its tenors, Swedish singer and composer Simon Åkeson.

To me the special thing about Christmas is all the cozy traditions and the family gathering. Just wish I still was a 10 year old kid!

The special thing about this album is first of all that it's our first "real" full length album. Special to me regarding the album is that I got to arrange the vocals for the songs with big band also! Being a huge fan of Gene Puerling and The Hi-Lo's since I was a kid it's always been a dream. It came true!

I'm really satisfied with the variation of styles we covered on this album with traditional american Christmas standards, hymns and also a very special original song by our very own genius James Rose. We also included one swedish and one french song on the album which feels very nice and of course makes sense in our group. There are some Christmas albums I've been listening to every Christmas for my whole life so making a Christmas album is very special to me. Hopefully it can become a classic for some people!

Maybe you can name some great Christmas albums - a cappella and other ones?

My TOP 5 would be The Singers Unlimited - Christmas, Take 6 - He Is Christmas and Osmonds - Christmas Album, and two Swedish Christmas albums: Glenmarks - Jul a la Carte and Charlotte Höglund - Mina gladaste julsånger.

Allright! Will listen to those for sure. You mentioned already international point regarding your band. How come it is such an international unit and is it making some difficulties or curiosities time after time?

I feel people have been pretty interested in our story. I mean our story is quite special being 6 members from 5 different countries. Of course we can't rehearse like "normal" groups the way we want and those kinds of issues but in some way I think it can also make us more serious and focused. We really have to do our homework and be prepared. Really helps that in this group everyone is equally passionate about the kind of music we're doing.

And you can hear that in your songs for sure! What about program in Riga? It will be 100 precent a cappella.

We love what we're doing and that creates energy! Although you might need to find a good mix of fun vs. focused. But somehow when having fun on stage it inspires you to sing better and it also gives you a better feeling about the concert afterwards. Also mistakes can be hidden by energy!

Accent started as a project of so called friends over internet. Do you see that as a new possible tendency for young musicians and new bands from all over the world? Any advices for youngsters?

Yes I've seen a lot of international collabs on YouTube since we started! But I don't know if I could really recommend and promote this way of starting a vocal group, but if you really want to find the people that are exactly as geeky into the music as yourself you might need to check other countries. I mean I wish I'd found all the Accent members in my hometown Skellefteå!

Another focus for your band is originality. Ir seems much easier for a cappella bands to perform cover versions of well-known songs made by others. But Accent is making original songs also. Why is it important for you?

It's pretty weird how it became acceptable in the vocal group genre to do covers without really being a cover band. I guess it's because it used to be so much more about arrangements rather than compositions. Even when writing an original a cappella tune people will still be very interested in the arrangement with the jazzy harmonies etc. At least in the more jazzy kind of vocal group music. A thing that's also been a bit of the art of this genre is the limits you have when you already have a song that has a melody and an original chord progression. When writing an original you can decide everything and sorta "cheat" by changing the melody for a certain chord to work etc. Maybe to a point where the melody even turned a bit less good.

I think the basics of the song like the melody and the lyrics needs to be great in the first place. Although a lot of times the arrangement is a huge part of the composition creating the vibe of the song etc. When managed to compose a song that people really like it's of course feels even better than when it's "just" your arrangement. I feel that original music makes you more of a unique group, especially if the music is special. I still love arranging covers though! After all from what I know my favorite group of all time The Hi-Lo's never wrote a single original song, except some jingles maybe. To me the trickiest part of writing original music is definitely the lyrics!

Why? There's nothing important to write about or you are too self-critical?

To me it's just that it feels too embarrassing.

A lot of musicians are using lyrics written by others. Why not go that way?

I've been writing a lot of music using also other text writers. Mostly in our symphonic rock band Moon Safari, but also poems, latin mass texts for my choir composing etc. On the Accent album In This Together I wrote a song called Who You Are together with Evan (Sanders) who wrote the lyrics. James is always doing everything himself. As in both the music and the lyrics.

Originality goes hand in hand with your wish to experiment. How far can you go with that in a cappella style and are you using some technologies also?

I mean I always want to experiment, try out stuff and learn. Recording a lot of weird stuff just for fun and so on, but at the end of the day I tend to come back to what I really like. Never want to do unique stuff just for unique's case.

But is it all real time a cappella possibilities for Accent or there are some technologies involved as loopers etc. also?

No we're only singing our six parts. Sometimes an egg (a shaker) might show up. We have some songs that could use some back ground percussion and we've talked about trying that with a looper or something. We've also performed with guest beat-boxers a few times. But our general approach is as old school as possible.

The collaborations are also a great way to search and find new boundaries, which you are doing a lot. There’s our neighbours Estonian Voices involved in new album also. Any ideas for new collaborations, maybe with some Latvians?

Yes I have a feeling we'll be doing something with our friends in Latvian Voices too one day! We really like them and their music!

Great to hear that! We are a singing nation. Is there an audience involvement in your concerts?

Yes usually we have at least some of that. We'll see what happens!

What are you expecting from performances in new territories? Isn’t it a little tricky keeping in mind that you perform not only well-known songs?

Yes maybe but hopefully the audience like our arrangements and way of performing them. We have some quite well known songs here and there.

I am absolutely sure that concert in Riga will be great! Maybe some greetings to Latvian audience from you?

We're really looking forward to our first visit in Latvia and to perform for you!