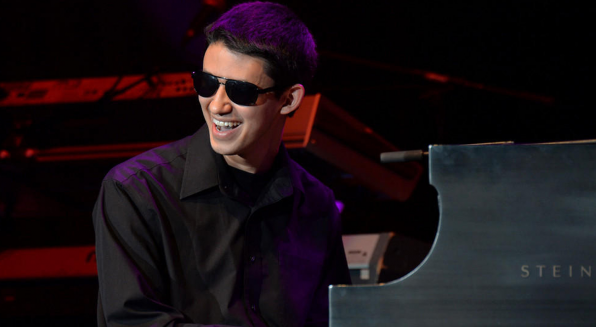 Artist started his career at the age of 15, and ever since he started to become popular. Nowadays he is one of the most wanted young jazz pianists and there are several reasons why. In 2012 the VEER Magazine gave him a special award of Years’ Jazz Artist, as he also won the International young solo contest the same year, not talking about his great performances at Thelonious Monk contest.

During 2013 and 2014 he was a part of Quincy Jones World tour as one of the Quincy Jones management representative artists. In cooperation with Jones was also created album called “Dedication” (2015).

At the age of 11 Justin turned blind, but this fact didn’t stop him from learning the piano, on the contrary – it rouse him to do it. In one of his interviews, he admitted that after the loss of sight, he had to find something different that videogames and basketball. So he found himself at the piano. Justin has a remarkable auditory memory with a unique manner and style.

A special place in the musician's professional career had an already passed away trumpeter, jazz legend – Clark Terry. The young musician and his mentor timeless relationship was captured in the documentary “Keep on keepin’ on”.

“In my opinion, he is one of the most talented pianist every lived in this world” – said legendary trumpeter Clark Terry.

Latvian Radio 1st studio is going to be the venue for the master classes for young and aspiring musicians.

Tickets for the Rigas Ritmi concerts are available at all Biļešu Paradīzes ticket offices and in the Internet: www.bilesuparadize.lv