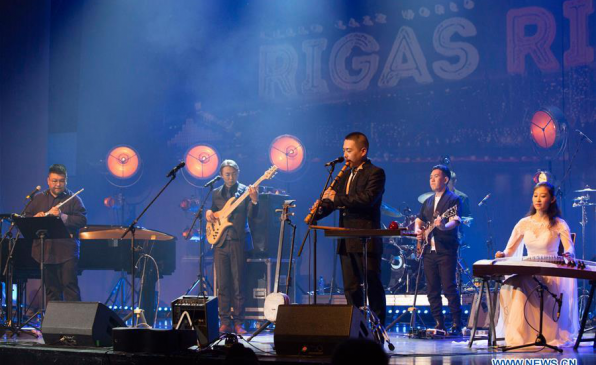 Rigas Ritmi (Riga Rhythms), the annual international jazz festival taking place in the Latvian capital, saw a whole bunch of super talented Chinese artists come to its stages this week with a number of dazzling shows and masterclasses.
A Bu, the 19-year-old Chinese piano prodigy who in April this year won the XII Riga Jazz Stage competition, returned to the Baltic country this summer to perform at the festival.
After wooing the audience with his performance at the VEF Jazz Cub on Thursday, A Bu gave a masterclass at Studio 1 of Latvian public radio, sharing his insights into musicianship and improvisation skills with young Latvian jazz artists.
"Improvisation has to be music from the future, not from the past," A Bu said during the masterclass.
In his second concert which took place at Riga Congress Center, the young Chinese jazz star improvised on classical themes, jazz standards and traditional Chinese music, earning rapturous ovation from the audience.
Tianchang Band, an orchestra of nine artists from Beijing who also performed at Riga Congress Center on Saturday, took the audience to an exciting journey into the world of Chinese popular music instruments, masterfully mixing traditional sounds of folk music with jazz.
One of the band's members, Li Roujie, introduced the traditional Chinese instrument guzheng in a masterclass she gave on Studio 1 of Latvian Radio. In the evening, six members of Tianchang Band played an exclusive outdoor concert in one of Riga's parks, drawing a large crowd of listeners.
The performances of the Chinese jazz artists in Riga were met with enthusiastic applause with many concertgoers noting that they had never heard music like this before and that the colorful, unique folk-jazz performed at the festival by the Chinese musicians was a real discovery to them.
Source: Xinhua