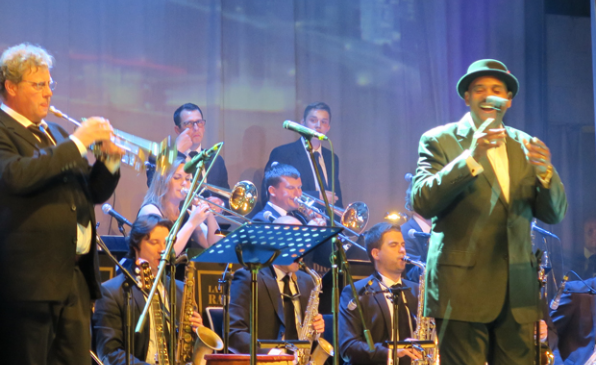 The cerebral meets the popular at the Rigas Ritmi Festival in Latvia by Kevin Le Gendre, published July 27

As Ramon Valle explains, the Ritmi in the title of this excellent festival in the small but utterly charming Latvian capital means rhythm and the programming remains true to that criterion in this 15th anniversary edition of the event. Apart from the snapping percussive attack of the Cuban pianist, which steers commendably clear of Latin-jazz clichés in an absorbing solo peformance, there is a wealth of good grooves to be heard, a prime example being the downhome funk of local brass-led ensemble Bunch Of Gentleman, who deliver a JBs-inspired set at the open air Egle in the Old town. Rhythms of a markedly more trance-like quality, with the pulse leaning heavily towards Afro-house, come from Bugge ‘n’ Friends at the splendidly appointed Kongresu concert hall. The Euro-American collective led by Norwegian pianist Wesseltoft is well bolstered by the sax and trumpet of Turkey’s Ilhan Ersahin and France’s Erik Truffaz, and in its inspired moments the music, shaped by Wesseltoft in full-on mad scientist mode, levels the ground between abstract electronica and tribal dance as New York producer-soundscaper Joaquin Clausell throws in heavy-duty beats on the fly.

Manipulation of an acoustic but no less imaginative kind comes by way of vocalist-guitarist Raul Midon whose trumpet-like scat and intricate chord voicings bring an orchestral quality to a highly engaging solo show. That kind of populism with integrity is also upheld by Ester Rada, a very promising vocalist from Israel whose energetic and largely danceable set moves from funk to reggae and all points in between, as the singer makes no secret of her admiration for the eclecticism of Nina Simone. Indeed the highlight of the performance is a very spirited reprise of ‘Feeling Good’, though Rada’s take on the difficult and demanding ‘Four Women’ does not have quite the requisite blend of pathos and resistance, a flaw sadly exacerbated by a rhythm section that is a touch too leaden. Having said that, Rada has considerable potential and the songs in which she taps into her Ethiopian roots and melds them with neo-soul a la Jill ‘N’ Erykah are impressive.

International artists aside the festival provides an important platform for young local musicians on the rise and the pick of the second day of showcases is Kristine Praulina, a powerful singer whose sharply drilled band presents a mature soul-rock influenced set whose bluesy, slide guitar-led finale goes down very well. The other side of Latvia’s musical heritage is the Radio Big Band which closes the four-day event with a tribute to Nat ‘King’ Cole with American Allan Harris handling vocals. Well-layered orchestrations, vivid solos, particularly the brass, and the addition of a string section more than do justice to staples such as ‘Nature Boy’, ‘Mona Lisa’ and ‘Straighten Up And Fly Right.’ Harris has the gilded tone and precise, gentle but forceful phrasing that made Cole such an influential vocal stylist down pat and in the LRBB there is exactly the kind of lush musical backdrop that serves the sophistication and beauty of songs that effortlessly bridge jazz and pop. Rigas Ritmi is treading a similar path, balancing the Cole project with music of a more cerebral nature – a concert I missed was the trumpet-accordion duo of Paolo Fresu and Daniele Bonaventura but according to the feedback it was really exceptional – and it will be interesting to chart the festival’s development in years to come