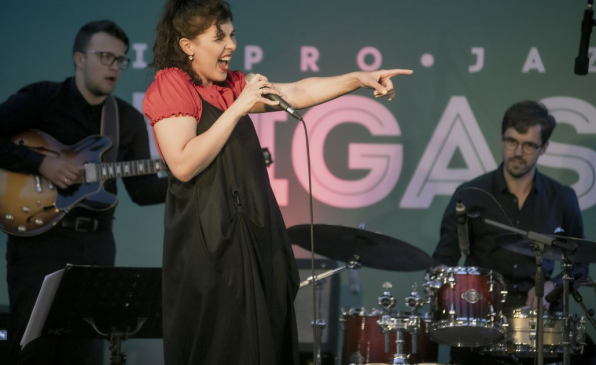 A milestone birthday is not so easy to miss. This is what the makers of Rigas Ritmi in Latvia's capital Riga thought. And they didn't cancel their festival, as most other summer festivals had to do due to many restrictions.
In Riga, however, there was no sign of Corona at the beginning of July. The country has only a 1,000 known infected people, and maybe one or two people are newly infected every day. That's why you don't see masks anywhere, not outside on the streets and nowhere in the buildings.
At the festival, all appearances of the anniversary edition, which has been shortened by one day, took place outside anyway. The program has been adjusted. International stars like the Cuban pianist Roberto Fonseca won't come to Latvia until the end of the year, while Riga's Ritmi 2020 was dedicated exclusively to the Latvian scene in July.
There is, for example, the guitarist Rainis Jaunais, a globetrotter who likes to discover new corners of this planet, likes to tell about them and is musically inspired. Jazz is not really what the highly virtuoso, very personable guitarist plays with his quartet. Rather folky pop music. But the man from Riga can do pretty much anything with his acoustic guitar. It was fun to watch for a while.
The same applied to the appearance of Rūta Dūduma and her band. The singer may not have the biggest voice, but she has a lot of charisma, a real stage charisma. Primarily, she sang her way through a program of jazz standards. But the way she sang the old, well-known classics, it just had something. And then there was music by Rachmaninoff, which the quintet naturally transformed into jazz and, of course, made Rūta Dūduma sing in Russian.
Anyone who calls themselves Very Cool People has a sense of humor. And then it should actually be cool. It is the eight-person troupe around guitarist and band founder Elvijs Grafcovs. Not only does the band look casual in their black suits, their self-composed jazz radio sounds fresh, cheeky, yes, cool - and in a good mood in every note. In the second part of the concert, together with the pop singer Aija Andrejeva, who is popular in Latvia, a program with songs by Janis Joplin was premiered - a great idea because it was implemented strongly and convincingly.
Incidentally, you will look in vain for a real jazz club in Riga. The ones that existed somehow didn't work economically. But there is a nice cider bar on the edge of the old town with a room and an inner courtyard for concerts, depending on the weather. Young bands presented themselves there on the three festival evenings. And young jazz musicians were allowed to take part in the subsequent jam sessions in this relaxed atmosphere. It was a special festival experience in Riga during these times. In an exciting city that wasn't nearly as crowded this summer as it usually is at this time of the year. Which is not necessarily a bad thing. Downsizing in tourism - if there is something good about Corona, then that is definitely one of the good things.
Christoph Giese, Jazzthetik