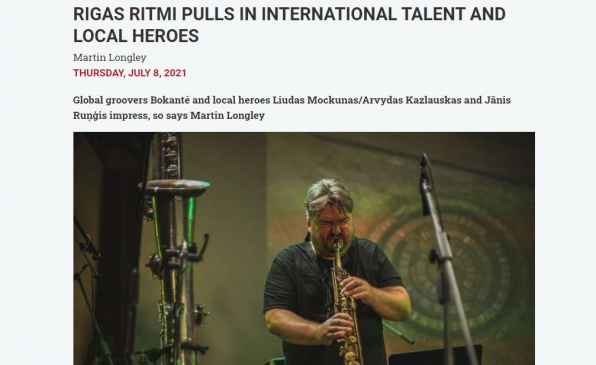 The 21st Rigas Ritmi festival was able to exist in the physical realm, as Latvia has just recently started to revive its live music scene. Subtitled ‘Impro-Jazz-Global’, this four-dayer did indeed cover all of those areas, with Bokanté (formed by Snarky Puppy’s Michael League) providing the Guadeloupean fusion, and the Spanish saxophonist Antonio Lizana offering his marriage of jazz and flamenco. The festival’s only disadvantage is that several shows always happen simultaneously, around seven or eight p.m., meaning that punters are forced into choosing just one of the night’s potential gigs. This year, most of the artists were Latvian, but there was also a substantial presence from the neighbouring Lithuania.

A significant part of the programme was taken up by the Jersika record label’s showcase, spread over three evenings, on the unusual location of the NOASS barge, moored on the Daugava River. It’s a large rectangular space, like a giant cargo container, and primarily an art gallery. Jersika only sprouted in 2017, but have already become quite prolific, with almost all of their nights featuring three acts, each presenting a new-ish album. Jersika champions vintage analogue techniques, very inspired by our own Gearbox. Their reel-to-reel machine spun purposefully through each set, gathering material for future record releases as it perched in full view on the label’s merchandise table.
The Jersika selection on Rigas Ritmi’s final night ranged widely, its high point being a powerful blast of freedom improvisation. The Lithuanian saxophone duo of Liudas Mockunas and Arvydas Kazlauskas travelled from extreme depths up to trilling heights, with their impressive range of horns, often sounding structured, as if improvisation was taking place around agreed patterns. This duo’s freshly released vinyl album, Purvs, was finely recorded in a peat bog. The Latvia-bound truck of saxophones ranged from sopranino to bass, with the Mockunas monster resting on its special metal stand. Baritone and sopranino opened their set, dotting shrilly, blatting from the bottom, developing a song-feel, a linear logic. Mockunas switched from baritone to soprano, his highness harmonised with himself, as he doubled notes via sleight-of-hand fingering. The deep plumbing was taken care of by Kazlauskas. Next, they paired alto and tenor, in a fluttering togetherness which graduated into a ripping, fast-quaver assault, complete with bluesy vibe. Mockunas ended up with two saxophones in his mouth, issuing a fanfare, then dual-parping while Kazlauskas soloed. The towering bass saxophone was the final aural resort for punishment, a low-slung procession helped by baritone underlining. This duo consistently emitted a fierce odour of tension.
The night’s other two acts were native Latvians. Jānis Ruņģis had opened up the evening with a solo set, although he was switching between guitar and keyboards, making much use of live-looped layering. Gentle traceries spun out, calling up memories of I Advance Masked, that old 1982 collaboration between Andy Summers and Robert Fripp. Ruņģis hit a wall of repeat, his phrases gaining a rough edge, before he doubled on Fender Rhodes and a clavinet/harpsichord sound on a smaller clavisimbalum keyboard. Then, he coated a guitar solo over their surface, with added effects sustain and bluesy sliding. The second extended number had a fuzz clarion call against a held hum, looped again and overlaid with bowed guitar string groans. The only disappointment was that the pieces got shorter and shorter, and the set seemed to merely peter out rather than reaching a climax, although a glance at our watches revealed that a surprising 43 minutes had breezed by pleasurably.
Such an obvious peak landed at the show’s conclusion, courtesy of vibraphonist Miķelis Dzenuška and his hard-funkin’ six-piece. The leader repeatedly moved from his main instrument to a side-placed Fender Rhodes, soloing on the vibes, then launching into runaway themes on his keys. Those parts were where other band members took the chance to rip out their own solo features, particularly Svens Vilsons on guitar. Sometimes they found a Latinised funk, very tightly arranged, with careening cuts from one riff to another, accents changing to create a shimmering, heated hurtle of mind-body syncopation.
Customarily, Rigas Ritmi is a more international affair, but this 21st edition took its time to look inwards towards the Baltic State scene, making it ideal for a visiting newcomer to that territory.
The September print edition of Jazzwise will include a Rigas Ritmi review featuring a different selection of artists...