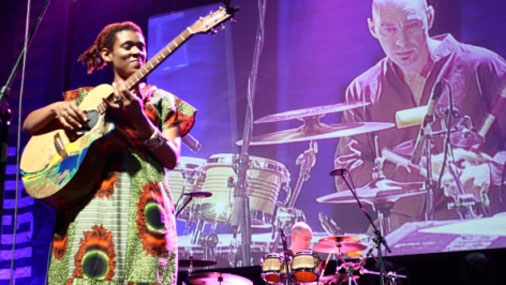 As a tourist destination, Riga, Latvia is pretty much off the grid. But in high summer the city is an idyll. There are deep green manicured parks with canals winding through them, on which slow rowboats barely leave a wake. Other European cities have twisting cobblestone lanes and dramatic skylines with the spires and domes of medieval churches. But only in Riga can you look up from almost any sidewalk and be startled by huge gargoyles and grotesque staring faces hanging off the sides of buildings. Riga is the Art Nouveau capital of Europe. It is a Unesco World Heritage city and a lovely backdrop for a music festival. Rigas Ritmi ("Riga Rhythms") took place there from June 30 to July 2, 2011.

Artistic Director Maris Briezkalns points out that Rigas Ritmi, now in its eleventh year, has never billed itself as a jazz festival. "We don't need to put a label on it," he says. He believes that the festival's primary mission is to "build a public" for jazz in Latvia. He also believes that assembling a festival program is "like painting a picture, like pointillism. From many parts and details, hopefully there is finally a whole, with its own identity. We try to make the best program we can, with the best musicians we can afford, with the variety to appeal to as many people as possible."