Home > The Festival > News > The Rīgas Ritmi Festival 2022 has ended

The Rīgas Ritmi Festival 2022 has ended 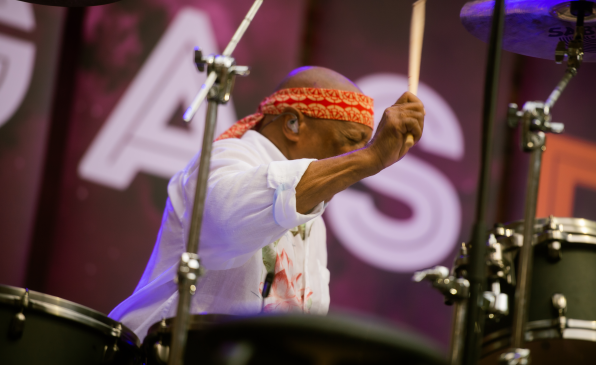 The 22nd international improvisation, jazz and global music festival Rīgas Ritmi has ended. It took place in several places of the Latvian capital from June 29 to July 2, when the jazz greats Modern Standards Supergroup, the global music group Ayom from Portugal, the American singer Clark Beckham, the Latvian jazz-funk group Very Cool People with singer Paula Saija, British singer, multi-instrumentalist Xantoné Blacq and other colorful artists performed.
The highlight of the festival was the Modern Standards Supergroup concert, in which five world jazz stars – drummer Billy Cobham, trumpeter Randy Brecker, saxophonist Bill Evans, pianist Niels Lan Doky and bassist Linley Marthe – performed together. Although the leader of the project performing jazz arrangements of the modern pophits is the award-winning Danish piano genius Niels Lan Doky, it is understandable that the most awaited for the audience was the visit of legendary drummer Billy Cobham and no less legendary trumpeter Randy Brecker to Latvia. The concert of the supergroup was also attended by many popular domestic musicians, whose evaluation was unequivocal – that was the highest class jazz at the Rīgas Ritmi Festival.
The bright stage show was provided by the international global music group Ayom from Portugal as well, both visually and aurally masterfully mixing together influences from the musical traditions of Brazil, Africa and the Mediterranean countries. The most colorful member of the group Ayom is its leader – vocalist and percussionist Jabu Morales, who at the end of the concert demonstrated dizzying Brazilian frevo dance style tricks, and on the morning of the performance, together with her colleagues, gave an expressive master class to Latvian music students in the Latvian Radio Studio 1.
The American singer and songwriter Clark Beckham, who was also one of the leaders of the master classes, also gave a convincing concert at the Rīgas Ritmi Festival, and proved his talent and stage charisma one hundred percent. Traditionally, the Latvian jazz-funk group Very Cool People offered a new song program at the festival. This time together with the young and promising singer Paula Saija.
These festival concerts were held in the scenic garden of the Riga Cathedral, while another stage was located in another excellent location – the art center Noass on the AB dam. The Jersika Stage curated by the jazz label Jersika Records operated there. Harpsichordist and clavicymbalist Ieva Saliete and the psychedelic jazz rock group Psychosis Amoralis surprised the audience with unusual, more experimental performances, while American drummer, winner of the Riga Jazz Stage 2022 competition Domo Branch, Latvian master of the Hammond organ Atis Andersons with his trio, the local neo-fusion group Lupa, as well as the expressive British jazz, funk and soul singer and multi-instrumentalist Xantoné Blacq with his quartet provided an atmosphere closer to a great jazz and funk party.
The official jam sessions of the festival, under the leadership of Latvian double bassist Andris Grunte’s trio, took place in the Riga Jazz Lounge bar at the Radisson Blu Latvija hotel. Concerts by great Italian artists were also held there guitarist Daniele Mammarella together with his Latvian colleague Reinis Jaunais, singer, Riga Jazz Stage 2022 laureate Valentina Fin and guitarist Filippo Ieraci performing.
The festival program will also be continued in the autumn sessions of Art of Riga Jazz in the Latvian Radio Studio 1. It is already known that the Spanish singer and trombonist Rita Payés will perform in Riga on November 11.
The festival is organized by the Contemporary Music Center Foundation, supported by Riga City Council, State Culture Capital Foundation, Investment and Development Agency of Latvia, Tele 2, Latvijas gāze, Audi Latvija, Turkish Airlines, Embassy of the United States of America, Embassy of the Italian Republic and other lovers of quality music.
The Rīgas Ritmi Festival 2023 will take place from July 6 to 8.
PHOTO GALLERY OF RIGAS RITMI 2022